Nearmap (ASX: NEA) was up around 12% at the open this morning following revelations that the aerial imagery company has for the first time reached an annual contract value (ACV) of $150m for its group portfolio.

Nearmap has also signed its largest ever government annual contract in North America, which means the North American ACV portfolio surpasses US$50m for the first time.

Management believes the largest ever government annual contract win in the North America is testimony to the underlying value and benefits government organisations receive from Nearmap technology, data, content and analysis.

North American ACV had for the first time surpassed the ACV portfolio of its Australia and NZ portfolio, and management expects the North American operations to continue to contribute the lion’s share of Group ACV in the future.

“To announce this ACV milestone in the same month we signed our largest ever government annual contract in North America shows our global growth engine continues to power ahead.”

Today’s share price rally is welcome relief for Nearmap which has been losing ground since early November last year. The stock is currently trading -28% lower than the same time last year.

Based on the three brokers that cover Nearmap (as reported on by FN Arena) the stock is currently trading with 56.4% upside to the target price of $2.03.

Last month Macquarie upgraded Nearmap to Neutral from Underperform, noting that stronger than forecast revenue growth could result in positive operating leverage and positive earnings revisions over the medium term.

However, the broker also flagged near-term risk from legal proceedings which – if a resolution is not reached – could result in greater than forecast cash burn. While the stock is now trading above Macquarie’s target price of $1.40, it remains to be seen if today’s announcement warrants a further upgrade.

While Citi is equally concerned that the legal case from Eagleview is creating an overhang for the share price, the broker is encouraged that Nearmap’s growth in North America doesn’t appear to be materially impacted.

After adopting a lower valuation multiple, Morgan Stanley last month lowered its target price to $2.60 from $3.20 but retained its Overweight rating (17/02/22).

Consensus on Nearmap is Strong buy.

Based on Morningstar’s fair value of $2.12, the stock looks to be undervalued. 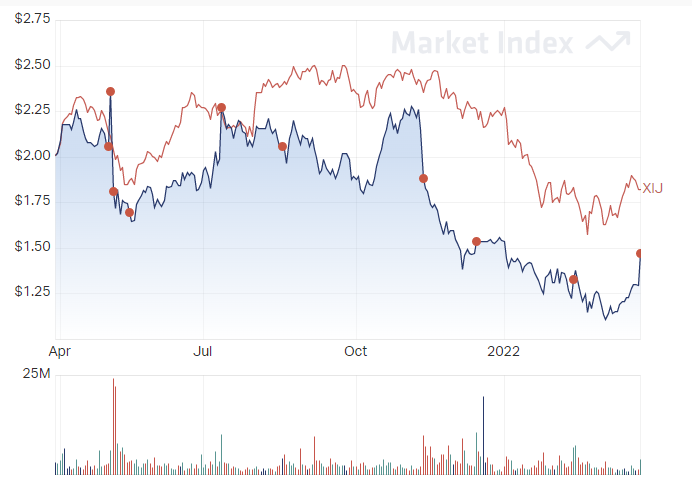 Nearmap's share price has struggled over the last 12 months.