Lark Distilling (ASX: LRK) was up 6.30% an hour out from the open after the Tasmanian whisky distiller recorded its highest-ever sales quarter, with unaudited net sales growing 72% to $6.8m versus the fourth quarter last year.

Due to the general improvements in the company’s operating environment and return to on-premises sales, Lark’s FY22 unaudited net sales of $20.3m were in line with guidance, and up 57% year-on-year (YOY).

However, for added context the sales price per litre observed within FY22 remains within prior guidance range of 15 to 25% YoY.

The FY22 result is expected to be announced to market in late August.

Founded in 1992 by pioneer Bill Lark, the company houses a range of spirits headlined by its single malt whiskies. In April 2021, Lark Distillery was named Australia’s first carbon-neutral distillery under the Australian Government’s Climate Active Program.

Since the acquisition of the Pontville Distillery the company now has three sites to produce 'unique and sophisticated' whisky profiles across Bothwell, Pontville and Cambridge distilleries.

Today’s upbeat result should go some way to refocussing investor attention back on company fundamentals which were hijacked by the antics of the former CEO earlier this year.

Shares in the one-time ASX smallcap darling fell -21% in February following the shock resignation of CEO Geoff Bainbridge following revelations of drug use and explicit language.

Since hitting a 52-week high of $5.61 last October, after a first stage capital raising of $45.5m, the share price has virtually been halved.

Meantime, the first-half saw Lark report net sales of $10.4m, an increase of 78% on the previous period.

Four months on and Lark is still looking for a new CEO.

During the next quarter the company plans to continue introducing the Lark brand to new customers, offering targeted limited releases to Lark followers through a disciplined yet innovative approach to marketing.

Given that the fundamentals of the company remain intact, some brokers regard Lark as ‘dirt cheap’.

While broker coverage of Lark is light, Ord Minnett maintained a Buy on the stock following the first half result which was in-line with the broker’s expectations and pre-guidance by management.

While Ord Minnett’s March price target suggests 138% upside to today’s price, there’s every likelihood this will be revised in coming days following this morning’s update.

Consensus on Lark is Strong Buy.

Based on Morningstar's $4.42 fair value the stock appears to be undervalued. 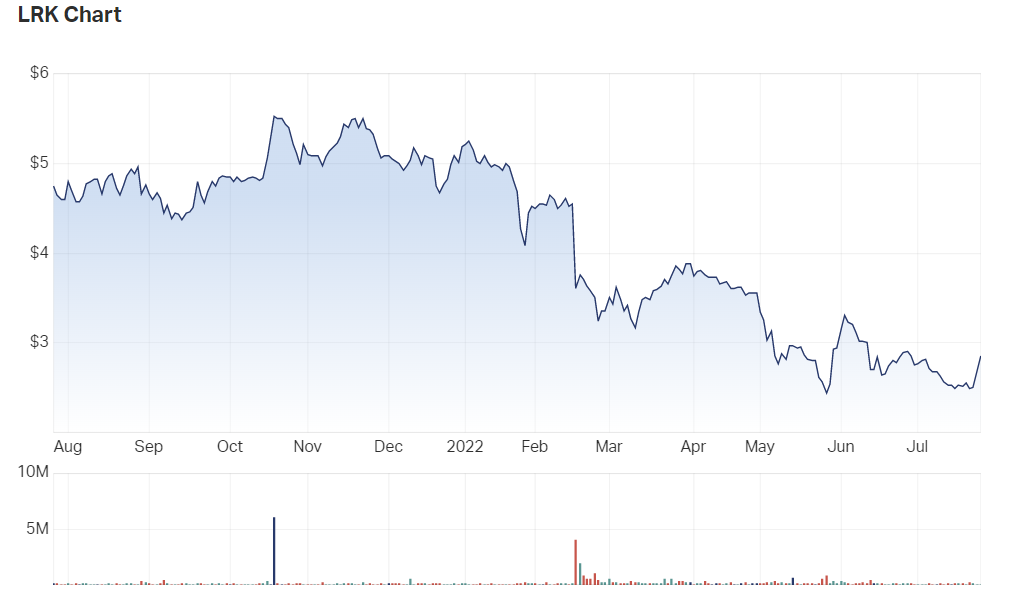