Lake Resources’ selloff is further evidence the lithium party is over

Lake Resources’ (ASX: LKE) first day as an S&P/ASX 200 company turned out to be bad omen, with the lithium developer’s share price down -13.69% to the close today. Despite the company’s fairly chipper announcement, the stock appears to have been caught up in the tough love being dished out to most players in the listed lithium space and across the broader metals market.

While Lake still remains inside the top 200 (now ranked 192) with reduced market cap of $1.8bn, any further losses could see it back outside this coveted cohort next time the index rebalances.

On a tear over the last year, the lithium developer’s share price is up 344% on a 12 month looksee. However, recent share price performance, down -46% since early April 2022 is further evidence that the lithium party is lower.

What Lake told the market today

Ironically, if Lake’s announcement today - that Stu Crow will serve as the company's executive chairman for six month to assist in its transition to serve North American and Asian supply chains - had been released two months ago, the share price may have gone up by as much as it fell today.

As part of this transition to North America managing director Steve Promnitz plans to leave after establishing Lake’s dominant position in Argentina.

This footnote has clearly troubled some investors given the role Promnitz has played getting the operation to where it is now.

Where to from here

Lake also reminded the market of its aspirational target is to reach capacity of 100,000 tpa by 2030. This underpin Lake’s ambition to become a leading global producer of sustainable high purity lithium.

The company has one of the largest lithium lease holdings in Argentina amounting to more than 2,200skm with most leases owned 100%. Lilac Solutions has the right to earn up to 25% of the Kachi project upon achieving certain milestones. 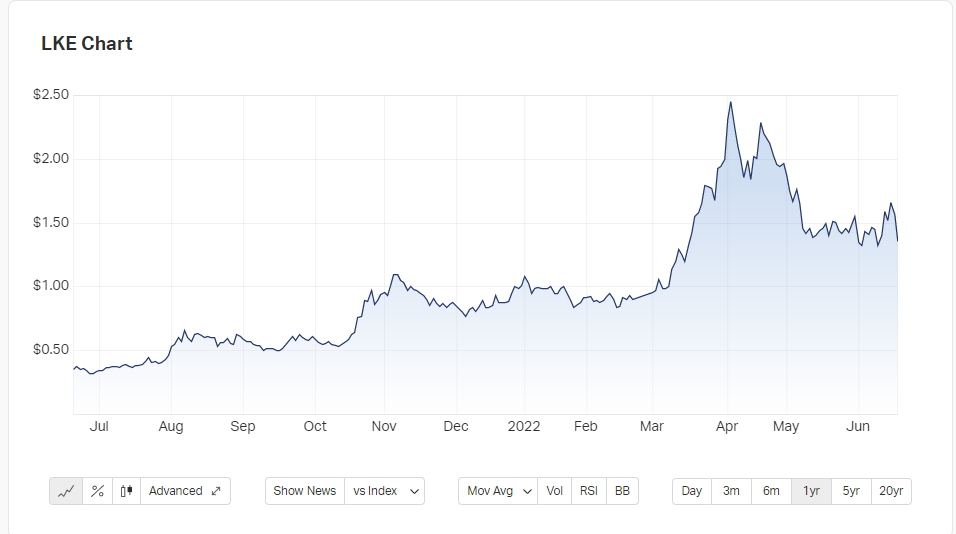 Consensus on Lake is Strong Buy.

Based on Morningstar’s fair value of $2.51 the stock appears to be undervalued.

The broker’s target price of $2.83 suggests 90% upside of the current price.