Monadelphous Group (ASX: MND) was up slightly higher at the open after the engineering company announced new contracts, which together with extensions in the resources and energy sectors in Australia and PNG amount to around $230m.

Today’s announcement follows the $400m of new contracts and extensions in the resources and energy sectors that the company updated the market on mid-February.

On a region-by-region basis, new contracts announced today are:

A contract with Rio Tinto for the provision of shutdown works at the Greater Tom Price operation in the Pilbara region of WA.

The work includes upgrades and modifications to existing process plant infrastructure at the Western Turner Syncline Phase 2 project. This work is expected to be completed in the second half of 2022.

Also in WA, Monadelphous extended a three-year contract to provide operation and maintenance services at Synergy’s Muja Power Station in Collie, as well as a two-year extension to provide maintenance, turnarounds and brownfields modifications at a customer’s offshore liquefied natural gas facility.

In Qld, the company signed a three-year contract with Origin to provide turnaround and shutdown support services at their coal seam gas upstream facilities for Australia Pacific LNG operations.

In NSW, Monadelphous agreed to a multi-disciplinary construction services contract with Tronox Mining Australia in Broken Hill. The work is expected to be completed in the second half of 2022.

Finally, in PNG Monadelphous has been awarded a contract with Newcrest Mining (ASX: NCM) to provide engineering, procurement and construction services on the CCD 3 & 4 Refurbishment Project at Lihir Island.

The work, which includes the major overhaul of two tanks associated with the gold production facilities, is expected to commence onsite in July 2022 and be completed in mid-2023.

While Monadelphous has struggled to attract investor support over the past year, a positive market response to the company’s interim result to 31 December 2021 saw the share price jump from $8.99 mid-February to $11.55 early March.

Underscoring the company’s positive first half result was a 12% uplift in revenue, with net profit after tax of $30.1m, up 17.7% from the previous year.

During the period the company also secured around $860m of new contracts and contract extensions.

Management expects a shortage of skilled labour to continue to be challenging, especially in WA.

Based on an expected decline in construction activity in the second half, management also expected full-year revenue for FY22 to be approximately -5–10% lower than the previous year. 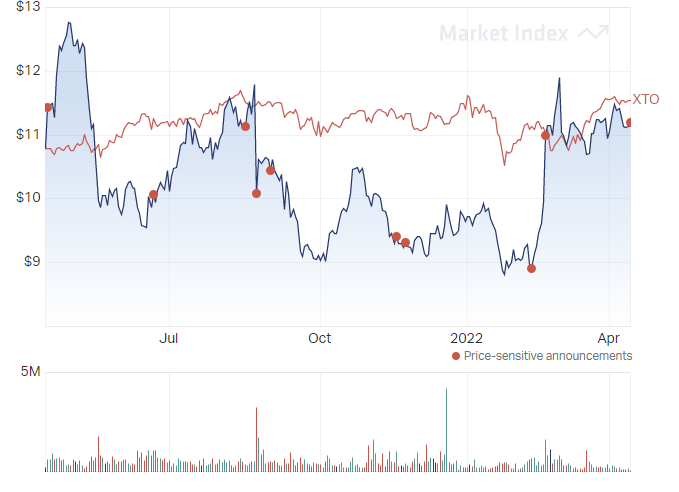 Based on the brokers that cover Monadelphous (as reported on by FN Arena), the stock is currently trading with 1.8% upside to the target price of $11.40.

Within the company’s first half result, which was well ahead of Macquarie’s forecasts, the broker notes that maintenance - now comprising 56% of group revenue - lifted 21% due to resource/energy sectors catching up on deferred activity.

The broker sees a "significant bidding opportunity" emerging across the lithium, gold, copper, renewables and iron ore sectors, and retains an Outperform rating with the target rising to $12 from $11.

Ord Minnett retains a Buy rating and based on a robust outlook for all commodities increases the target price to $12.50 from $11.50.

Given WA is only now seeing an omicron wave, Morgan Stanley is unsure about FY23, and retains an Equal-weight and $11.20 target.

However, at time of update (23/02/22) the broker noted that new contract wins and more clarity on FY23 conditions would provide greater room for upside.

Consensus on Monadelphous is Moderate Buy.

Based on Morningstar’s fair value of $12.47, the stock appears to be undervalued.