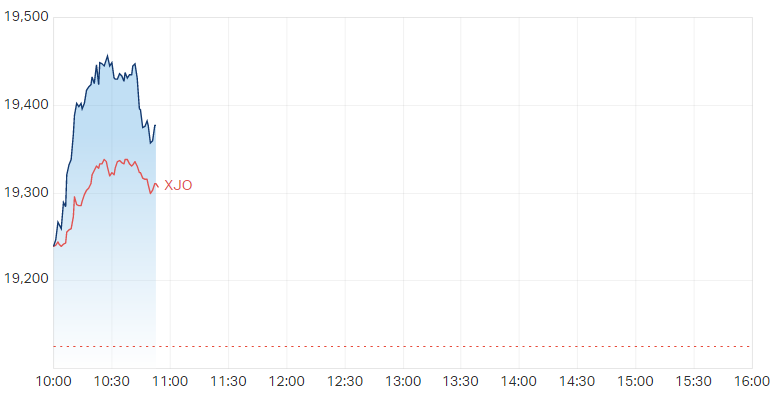 Intraday chart of the S&P/ASX 200 Materials Index, with the ASX 200 shown in red

The non-lithium asset spinoff of Liontown Resources (ASX: LTR), Minerals 260 (ASX: MI6) has discovered a second significant copper-gold zone at the Moora Project in WA. The company's stock is up 9.4% in early trade.

Minerals 260 said that current results continue to demonstrate the potential of the Moora Project to host major precious and base metal discoveries.

Strickland Metals (ASX: STK) reported its first assays from the Millrose Gold Project in WA. The stock was up 15% as the market opened.

“It’s very exciting that assays are beginning to flow from our 2022 drilling campaign. Even more exciting is the fact we are intersecting such wide, consistent zones of gold. The result in MRRC089 – 55m @ 2.4g/t Au from 86m – is one of the most impressive assays to date out of all historic Millrose drilling,” CEO Andrew Bray said in a statement.

“LEX will follow up as soon as possible. We will look north, south, east and deeper around the current excellent intersections to establish the size of what we already have to JORC resource status as soon as possible,” Chairman Gordon Galt said in a statement.

Desert Metals (ASX: DM1) has returned a number of significant nickel intercepts at the Innouendy Project in WA.

Interestingly, multiple samples across 10 holes indicated elevated lanthanum, a rare earth element. A selection of samples have been submitted for further analysis to determine the presence of any rare earth elements. The company's stock is up 13% in early trade

Vanadium have caught the interest of investors, given its emerging use case as a sustainable battery solution for the renewable energy sector.