Is it time for profit-taking on toppy oil stocks?

Even before the invasion, Brent crude had risen from about US$68/barrel in December, to about US$97/barrel, after global GDP recovered from covid more quickly than anticipated.

Major producers in OPEC and US shale producers have exacerbated this recent supply bottleneck by failing to boost production enough to match the post-covid demand.

Then Russia’s invasion on February 24 worsened the situation, driving up crude prices to as high as US$130/barrel by March 10.

But the market chaos has been a boon for Australian producers, including Santos Ltd (ASX: STO), Woodside Petroleum Ltd (ASX: WPL) and Karoon Energy Ltd (ASX: KAR), whose stocks have risen to their highest points since the start of covid.

Woodside, whose production fell -9% in FY21, to 91m barrels oil equivalent (BOE), estimates that its net profit after tax (NPAT) benefits by around $18m for every $1 increase in the Brent crude price.

The company will spend up to $4.2bn this year on its Pluto Train 2, Scarborough and Sangomar projects, and is due to complete its merger with BHP’s petroleum businesses mid-year, which - if approved by shareholders - would roughly double the company’s current oil production.

At Santos, production in FY22 is expected to increase to between 100m and 110m BOE after its acquisition last year of PNG producer Oil Search.

The company is expecting to invest in FY22 up to $1.3bn on growth projects, including Dorado and Barossa in Australia, and could invest a further $400m in other projects, depending on available cash flow.

The oil market - a story of war & peace, Iran and US supply constraints

Any sign of a peace deal in Ukraine would immediately cut prices, as would a signal of increased production from OPEC Plus producers or US shale oil companies.

The signing of a nuclear deal with Iran could also lower prices.

So far, there has been no sign of any of these.

The war rages on in Ukraine and is showing every sign of growing in intensity, while negotiations with Iran are continuing, but stumbling blocks to a deal remain.

OPEC Plus countries in early March agreed to its existing timetable - devised last year - to increase production in April by just 400,000 barrels per day.

Supply constraints were the main factor, as US shale firms have focussed on paying dividends rather than investing in new wells.

Given that an end to the Ukraine war would have a material and overnight impact on oil prices, some fund managers are warning investors to lock-in recent lofty gains or risk watching them disappear.

Consensus is currently Moderate buy on Woodside and Santos, and Strong buy on Karoon.

By comparison, based on the seven stocks covering Santos (as reported on by FN Arena), the company is currently trading with 17.5% upside to the current price.

Based these numbers, its Woodside that's trading the closest (under 10%) to what may be construed at an attractive point to start taking profit off the table. 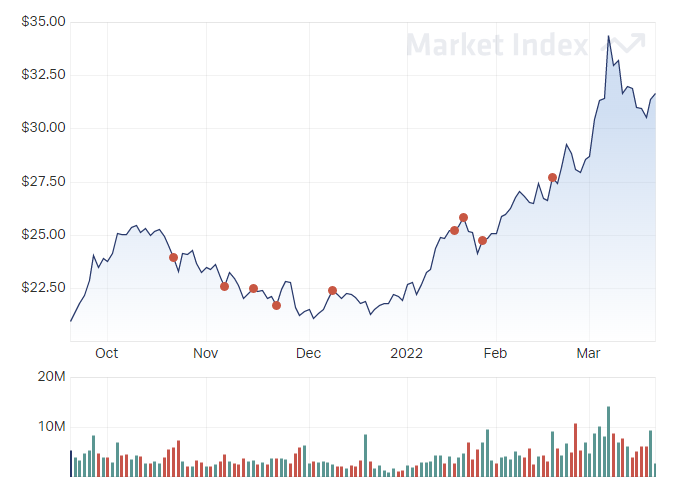