Grand Gulf Energy (ASX:GGE) shares have surged over 21% in afternoon trades with the company posting updated helium gas composition results for its maiden well at the Red Helium Project in Utah.

New wellhead samples from Jesse 1-A show concentrations up to 0.65% helium.

The difference reflects what is very nearly a flat fivefold increase.

Boosted results come on the back of a work-over campaign which saw the injection of materials downhole to stimulate gas flows.

Well being converted to production

Grand Gulf has demobilised the work-over rig as Jesse 1-A is now prepped to become a production well.

Equipment is being sourced and the company expects a re-test on the well between July and September. 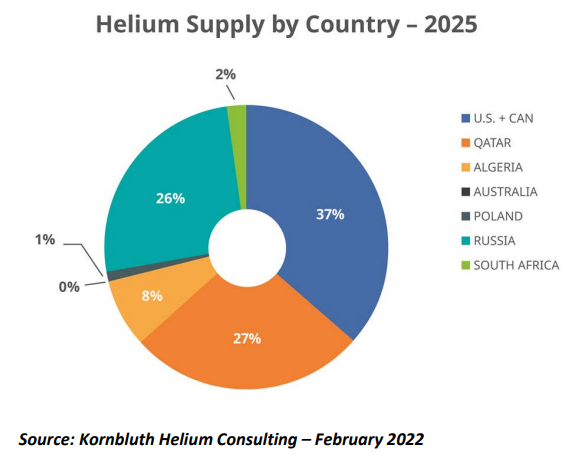 Projections of helium supply by country in 2025

Project in good location at a good time

Grand Gulf’s Jesse 1-A well is immediately nearby a utilised pipeline connected to the Libson helium processing plant, operated by Paradox Resources LCC.

There is currently a shortage of helium gas hitting world markets in 2022 as two unrelated plants in the US and Russia were both taken offline earlier this year for unscheduled maintenance.

US company Dollar Tree, which sells helium balloons for parties among other products, earlier this year published a statement on its website apologising for the shortage of helium balloons to American consumers.

In April, the US National Weather Service noted it wasn't able to release as many weather balloons as planned because it was not able to find the helium to send the devices skyward.

Investor interest is clear: year on year, Grand Gulf is up 180%.

To get an idea of Grand Gulf Energy's performance, one year charts provide the best POV