Shares in Uniti Group (ASX: UWL) dropped -1.3% yesterday with some investors taking profit off the table following the stock’s 27% rise on Tuesday after confirmation that the broadband services provider is now in takeover talks.

Infrastructure investor Morrison & Co, which has recent form in buying telecommunication infrastructure assets, has made a $4.50 per share offer which values Uniti at $3.05bn.

Morrison’s bid for Uniti follows the 49% stake the company, together with the Future Fund took in Telstra’s teleco tower entity InfraCo last year for $5.9bn.

In the wake of the offer, the Uniti board was quick to express doubts over whether Morrison’s indicative proposal would result in an offer to Uniti shareholders and has flagged that are other bidders are circling.

Other suitors are circling

Meantime, it’s understood that fibre and network solutions provider Vocus Group, owned by Macquarie Infrastructure and Real Assets and Aware Super is currently working on their own bid.

Given the exclusive negotiations agreement struck by Morrison, it will be another four weeks (22 April 2022) until any counteroffers can be considered.

However, some Uniti shareholders have already made it clear they think Morrison’s offer of $4.50 per share is not enough, with any future offer needing to be north of $5 to start attracting their attention.

While $5 per share, represented a 26% premium to Uniti’s closing price on Wednesday, that gap is closing with the Uniti share price up 4% at the open today.

Given the potential synergies, some shareholders are also quick to flag their preference for a successful bid by Vocus which provides wholesale, business, government and consumer telecommunication services across Australia and NZ.

Since listing at 25c a share in February 2019, Uniti is one of those stocks lucky enough to have been on the right side of the global pandemic. In the last two years, the group’s share price as doubled from $2.28 to $4.69.

The Uniti share price received a kicker mid-November following revelations the group was proceeding with a share buyback, and that net debt had reduced from $208m at the end of June 2021 to $183m. 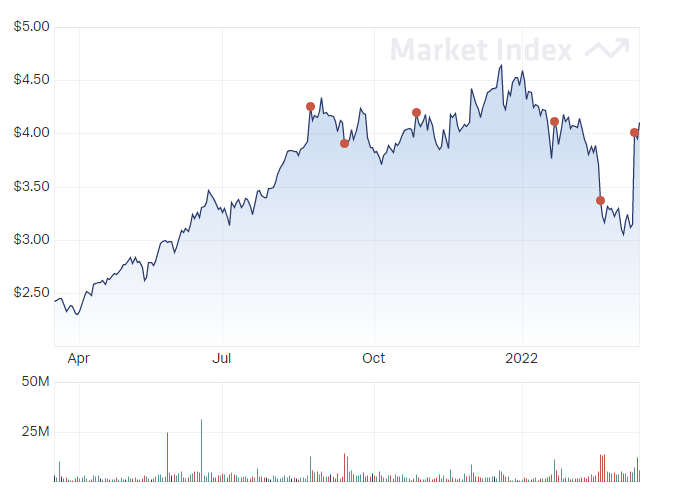 While Ord Minnett and JPMorgan both believe Morrison’s offer looks fair - and in line with other deals in the industry - they are not ruling out the likelihood of higher bids.

But while due diligence is being carried out, Ord Minnett has pulled back its rating to Hold from Buy.

Based on the strong expectation of additional offers, Ord Minnett has increased its price target to $4.05.

Given the quality of Uniti’s private fibre assets – a 290,000-plus premise pipeline and high margin network revenues – Ord Minnett expects a future deal to sit at the mid to upper end of the 15.5 times and 28 times forecasted earnings range that recent telco infrastructure transactions have traded at.

Based on the broker’s estimates there are annual synergies of between $9m-$15m from transferring a share of Uniti’s backhaul fibre requirements onto a third-party network.

Consensus on Uniti is Moderate buy.

Based on Morningstar’s fair value of $4.57, the stock looks to be undervalued.