The S&P/ASX 200 Materials Index is down -0.3% in early trade, greatly underperforming the broader ASX 200.

Commodity prices were relatively unchanged overnight as investors continued to observe the positive ceasefire talks between Russia and Ukraine. The two parties described the talks as ‘constructive’ with some degree of compromise in key areas such as Ukraine neutrality. 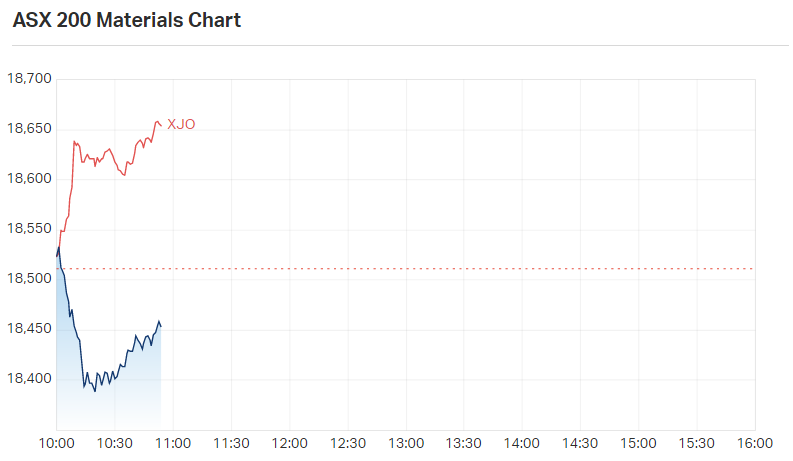 Intraday chart of the ASX 200 Materials Index, with the S&P/ASX 200 shown in red.

Copper prices have remained relatively stable around the US$4.7/lb level. Notable copper movers on Wednesday include:

Surging fertiliser prices has put potash under the spotlight. Several potash stocks have shown abnormal volume in several trading sessions in the past week. Notable gainers on Wednesday include:

The assay results showed presence of high-grade lithium in pegmatites, with peak grades of 3.22% Li2O.

“Lithium grades over two percent are not common, with most operations in Australia running between one to one and a half percent lithium. Our pegmatite Peg_2 is running grades of around two percent lithium, with a peak of over three percent over one meter, which are very high,” said Managing Director, Chris Gale.

The company will continue focusing on its drilling program, with further assay results expected to come through over the next few weeks.

Culpeo Minerals (ASX: CPO) has intersected copper sulphides at its first drillhole at the Lana Corina Project in Chile.

Shares in the microcap explorer spiked 180% in early-trade.

“This provides further confidence in the prospectivity of Lana Corina and its potential to host a significant copper deposit. We look forward to reporting assay results from the drilling program in due course,” said Managing Director, Max Tuesley.

It's interesting to note that before today’s run up, Culpeo had a market cap of around $5m and $4.6m in cash (as at 31 December).

MetalsTech (ASX: MTC) has provided a regional exploration assessment of its Sturec Gold Mine, located in central Slovakia.

The review has defined seven new zones of potentially significant gold mineralisation, while conceptual in nature, demonstrate significant exploration upside, according to MetalsTech. The targets are viewed to have a cumulative resource between 37.9m to 58.2m tonnes.

This is in addition to the company's existing Mineral Resource Estimate of 38.5m tonnes at gold grades of 1.23/gt at Sturec.

Upcoming catalysts for MetalsTech include: