Aluminium prices hit all-time highs of US$3,325 a tonne on Tuesday as strong demand outweighed limited output from major producers like China. 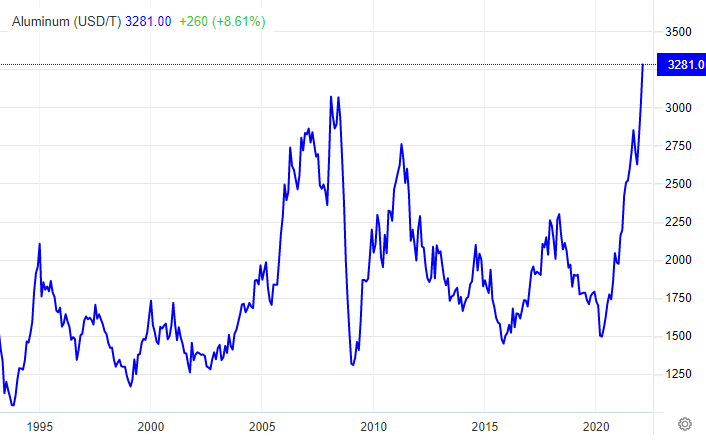 Aluminium stockpiles in LME-registered warehouses fell to 2007 lows of 767,700 tonnes, down from almost 2m last March, according to Reuters.

China, which produces more than half the world’s output, has restricted industrial production during the Beijing Olympics to ensure clear blue skies. This has weighed on near-term commodity sentiment, including aluminium.

The lithium bull market is showing no signs of fatigue, with January lithium spodumene prices rallying 45.5% on-the-month to US$2,400 a tonne, according to Benchmark Mineral Intelligence.

Benchmark Mineral Intelligence expects lithium prices to continue to trend higher for at least the next six months as battery demand remains elevated.

The selloff in response to hotter-than-expected inflation from the US has weighed on growth names, including lithium stocks. Most lithium stocks fell between -2% to -6% on Friday.

You can view a list of ASX lithium companies here.

According to Bloomberg, there was just 14,150 tonnes of copper available in LME warehouses, in an industry that consumes approximately 25m tonnes annually.

Shortages sent prices into backwardation, where spot prices were trading at record premiums compared to futures.

Iron ore what is gravity

Earlier this week, we flagged a number of near-term push and pull factors for iron ore including: