Despite funds under management growing 38% in the first half of FY22, Australian Ethical Investment Ltd (ASX:AEF) stock has nonetheless tumbled -50% since December, as part of a New Year global market rout driven by rising interest rates and geopolitical jitters.

The fund manager's share price was down -4.84 at noon for no particular reason, and may reflect current investor uncertainty around the sustainability of ESG investing in light of the longer-term fallout from the Ukraine war.

The fund manager, which recently launched its first exchange-traded fund (ETF) on the ASX, saw rapid inflows into its various funds throughout 2021, with assets under management peaking at $6.94bn at the end of December.

Total first-half FY22 revenue jumped 35% compared to the previous period, to $35.22m, while operating expenses increased 45%, to $27.39m, as the group spent more on marketing, and hired more employees to boost sales and improve investment capabilities in key areas.

First half net profit after tax (NPAT) increased 5% on the previous period, to $5.42m, with an interim dividend of 3 cents per share declared - in line with the first half of FY21.

The fund manager attributes much of the new flows - and the boost to revenues - to greater interest by the investing public in ethical investing (ESG).

In a report released on March 9, RIAA found that three-quarters (74%) of Australians would  consider moving to another provider if they found out their current fund was investing in companies engaged in activities inconsistent with their values.

So far about 84% of Australian Ethical’s sales come via the direct channel, but that could soon change.

Management confirmed on Friday that the company hired new team members dedicated to sales via the specialist adviser channel.

The fund manager has also upgraded its website to include pages dedicated to investment advisers and is fielding increased enquiries from financial advisers regarding ESG investments and seeking resources about the sector.

The fund manager also noted that between first half FY21 and first half FY22, adviser-related fund flows increased by 135% - albeit from a low base.

Despite the high level of funds inflow, Australian Ethical charges relatively high fees for its funds.

Its Australian Emerging Companies Fund charges 1.69% per annum, vs an average fee for similar funds of 1.27% per annum, based on Canstar data.

Australian Ethical has started to reduce its fees, however, as its larger scale drives efficiencies. Its total revenue margin - an indicator of fees -  fell from circa 1.6% in 2015, to 0.99% by the end of December 2022.

Australian Ethical’s Australian Shares Fund’s performance has sagged recently - it returned 4.1% in the year to the end of January, against 9.6% for the benchmark index. But the fund has beaten the index over 3, 5 and 10 years.

Based on Morningstar's fair value of $10.16, the stock looks significantly undervalued. 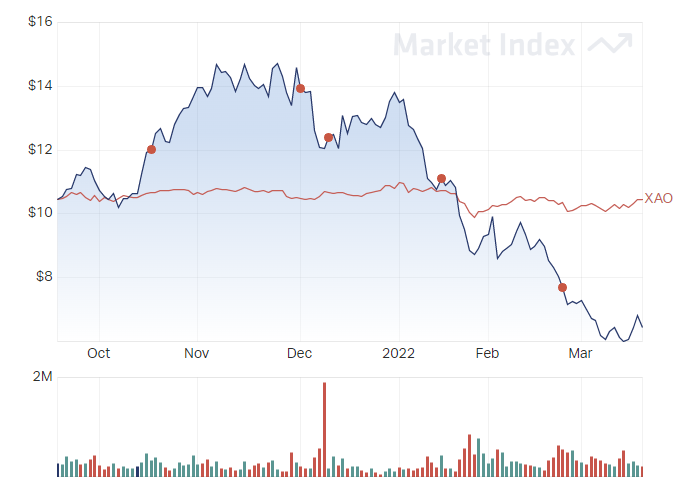 The last six months have not been kind to the Australian Ethical Investment.