AGL Energy (ASX: AGL) shares were down -3.5% at the open following revelations the power retailer will incur a $73m hit to its profit and is guiding to lower annual earnings following the breakdown of a major coal unit at its Loy Yang A power station in Victoria's La Trobe Valley.

Today guidance update follows revelations 15 April that Unit 2 at AGL’s Loy Yang A Power Station, the state's largest power station, had been taken out of service due to an electrical fault with the generator, leaving it without a quarter of its capacity.

Changes to guidance announced today include:

Investors should note that the original guidance, provided at last August’s full-year results, was already a decline on the figures for fiscal 2021, with the company grappling with the inflow of cheap renewable energy into the system.

Unlike 2019 when Loy Yang A experienced a seven-month break – and subsequently recovered $100m in lost earnings from business interruption insurance – AGL notes that the most recent outage is not recoverable via insurance.

At this stage, AGL expects the unit to return to service by 1 August 2022, which is late in the peak winter demand season.

Overall, the financial impact from the shutdown will be split between FY 2022 and FY 2023.

Wholesale futures spot prices have tripled to $176 per megawatt hour for the second quarter of 2022 - from an average of $57MWh for the fourth quarter of 2021.

In an attempt to soften the impact of the unit outage on its market position the company is reviewing whether it can delay some upcoming planned maintenance shutdowns at other units to help. 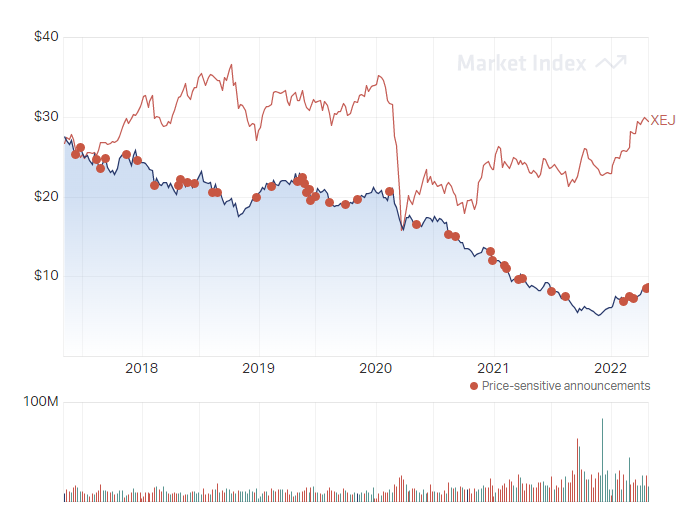 Having previously pre-empted an expected reduction in net profit due to Loy Yang A, Ord Minnett recently (21/04/22) downgraded AGL to Accumulate from Buy. (Price target 9.30).

Based on the brokers that cover AGL (as reported on by FN Arena) the stock is currently trading with a -3.3% downside to the target price of $8.37.

Consensus on AGL is Hold.

Based on Morningstar’s fair value of $12.74, the stock appears to be undervalued.