After a ‘car crash of a year’ is AMA surfacing as value-play or value-trap?

Investors in AMA Group Ltd (ASX: AMA) have endured turbulent times over the past three years.

Since peaking in mid-2019, shares in the car collision repair group have collapsed by 78%, amid investor concern over the troubled departure of former CEO, Andrew Hopkins, and later, sharply reduced repair volumes during the covid pandemic.

Shades of a turnaround

He said repair volumes in late 2021 and January 2022 were lower than hoped, but February volumes looked more promising.

“February volumes have continued to trend upwards, and the current headwinds are situational, not structural,” he said.

Data from Transurban (ASX: TCL) seems to confirm this - traffic in Sydney and Brisbane at the end of January was slightly above the level recorded at the same time two years prior. Melbourne traffic was still down on 2020 but looked to be improving.

Lower repair revenues, increased costs, higher employee expenses due to fewer Jobkeeper payments, and a $16.7m impairment were the main drivers of the bottom-line result.

Costs surged during the pandemic, from $561m in FY19 to $809m in FY21, as lower volumes reduced scale and the cost of parts surged amid a shortage.

To reduce this expense, Bizon said the company furloughed some sites and permanently closed others and is looking at improving the way it sources spare parts - which account for a lion’s share of group costs.

This includes a strategy to grow its own integrated parts supply chain, he said.

“We spend circa $350m in parts annually … and any investment into our own parts supply business will be margin accretive to the group , so that is a clear strategy to take advantage of the volumes we purchase,” he said.

Overall, the group has identified around $10m in savings on parts for CY22.

Another problem is that the pricing of older contracts with AMA’s insurance customers do not reflect the cost of operating during a pandemic. But these contracts will be renewed over the next 12-18 months and will reflect the higher cost of repairs in the new covid environment, Bizon said. 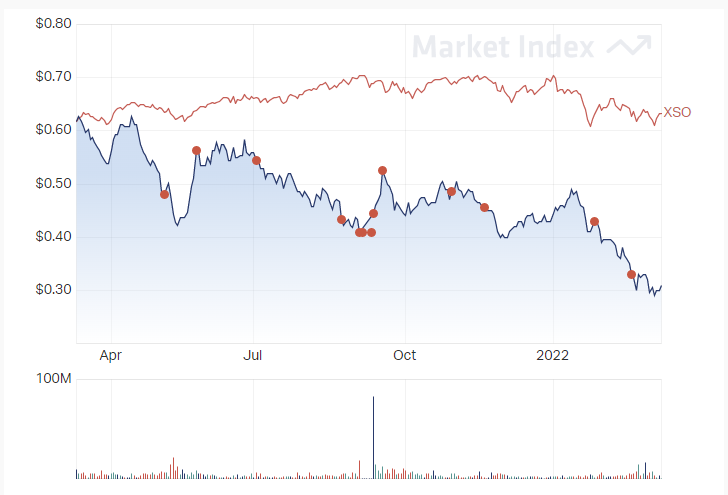 AMA has seriously underperformed against the Smallcap Index over the last 12 months.

Only one major broker, UBS, covers AMA Group. The broker has a Neutral rating, with a target price of $0.36, representing upside potential of 16%.

Fund manager Intelligent Investor, previously a strong advocate of AMA to its loyal investor base, now has a Sell at $0.45 recommendation on the stock.

Consensus on AMA is Strong buy.

Based on Morningstar’s fair value of $0.58, the stock appears to be undervalued.