Rising interest rates is one of the biggest stories investors are watching out for in 2022.

Inflation has remained stubbornly high, especially in the US, where its December consumer price index rose 7.0% year-on-year, the highest since 1982.

Goldman Sachs has forecasted four rate hikes this year, with a nearly 80% probability of the first hike taking place in March.

As the ultra low interest rate era comes to a close, here are two sectors to consider.

Back to making bank?

Banks can pass interest rate hikes onto customers, driving an increase in the rates they charge for loans and improving all-important net interest margins (NIM).

Interest rates in Australia have mostly been on the down low for almost two decades. 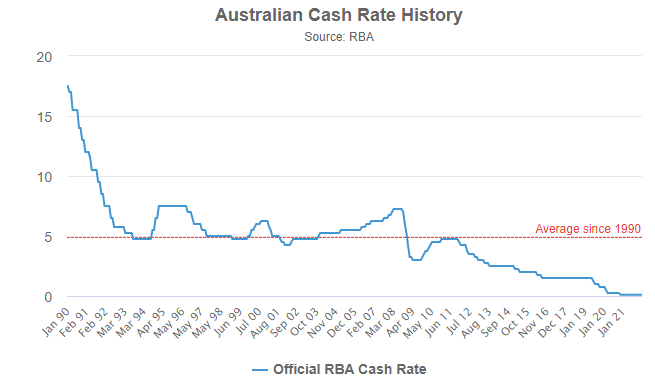 Banks' NIM have continued to deteriorate over the years, notwithstanding other factors such as intense home loan competition.

Taking a look at Commonwealth Bank (ASX: CBA) and its NIM:

In CBA’s November trading update, the bank flagged that “the Group’s net interest margin was considerably lower in the quarter.” With factors including home loan price competition, switching to lower margin fixed rate loans and the “continued impact of a low interest rate environment” to blame.

Morgans provided coverage of the major banks in December last year, with the view that a rising interest rate environment will support earnings growth.

With central banks, globally, set to raise interest rates, this could mark the beginning of a new era for banks.

We have you covered

Insurance stocks are typically slow movers, but 2022 is already shaping up to be a solid year for local players.

Year-to-date, the ASX’s largest insurance companies are up:

Insurance companies are compelled to stockpile safe haven assets including government and corporate bonds to back the policies they write.

That goes without saying, as interest rates rise, an insurer's underlying bond investments would begin to yield better returns.

QBE's investment portfolio is dominated by government and corporate bonds, which helped generate a net annualised investment return of 0.4% or US$58m in the first half of FY21.

Looking back just 10-years ago, the company's FY11 results reported investment returns of 3.1% or US$776m, with a similar investment portfolio (in dollar terms).