In addition to having multiple growth drivers across its diversified range of core business activities, Worley (ASX: WOR) has also been touted as an early beneficiary of the new Labor government’s commitment to turbocharging renewable energy.

Given the continuum of news flow emanating from Worley it’s hard for investors to second guess how or why any single update will move the price forward.

For example, news of a strategic partnership with Avantium Renewable Polymers [flagship facility in Delfzijl, the Netherlands] progressing to the next phase did little to ignite the stock’s fortunes on last week.

But yesterday saw shares in Worley exceed their previous highest mark since 2020.

Worley’s share price has been bouncing progressively higher since hitting a low of $9.36 late November 2021 and is now up 36.57% for the year.

The group’s share price was up 3.12% at the open today after the global engineering group revealed the details of a new contract with Heartwell Renewables, a joint venture between The Love’s Family of Companies and Cargill, to provide services for a greenfield renewable diesel plant in Hastings, Nebraska, US.

The new plant will produce an estimated 302m litres of renewable diesel per year from feedstocks such as vegetable oils and tallow. This renewable diesel can be used as a drop-in fuel in diesel-powered vehicles without any engine modifications.

Worley has also been awarded a contract by Borouge 4 LLC, a joint venture between ADNOC and Borealis, for the fourth expansion of Borouge’s integrated polyolefins complex in Ruwais, United Arab Emirates.

The Borouge 4 expansion will boost Borouge’s production capacity of polyolefins – including polyethylene and polypropylene – to 6.4m tonnes annually from its current 5m tonnes annual capacity, making it the largest single-site polyolefins complex in the world by 2025. 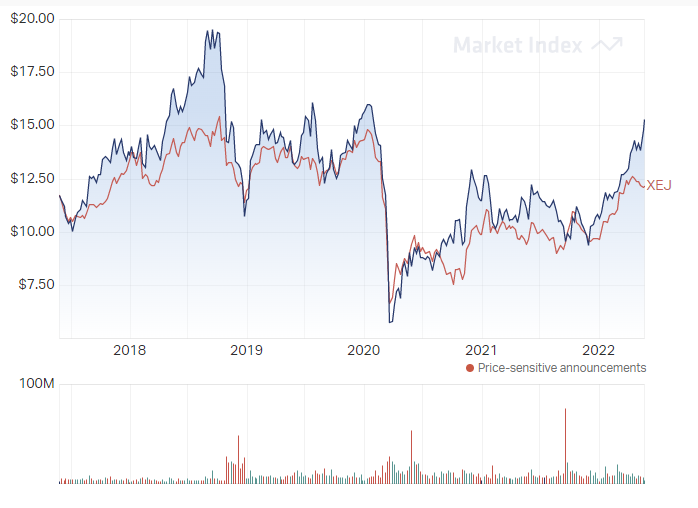 Consensus on Worley is Strong Buy.

Based on Morningstar’s value of $14.70, the stock appears to be fairly valued.

Based on the brokers that cover Worley (as reported on by FN Arena) the stock is currently trading with -10.80% downside to the target price of $13.15.

Late April Macquarie upgraded Worley to Outperform from Neutral and expects the company to  benefit from the redeployment of Russian oil and gas to other regions as governments are imposing bans on Russian imports, as well as from the new energy transition. Target price increases to $15.26 from $12.60.