Upcoming supplier of rare earths, neodymium-praseodymium (NdPr), Arafura Resources (ASX:ARU) entered a trading halt this morning amid speculation that resumption of trading on Friday will be accompanied with a major capital raise announcement.

Unsubstantiated market whispers suggest the rare earths company is looking to Bell Potter for a $50m raising to continue works at its wholly-owned Neodymium Praseodymium (NdPr) rare earths Nolans Project, in the NT.

News of a capital raise on Friday would follow the company’s late-April appointment of two leading mining project finance institutions to arrange a debt financing facility for further development at Nolans.

Underpinned by low-risk mineral resources with the potential to supply a significant proportion of the world’s NdPr demand, the Nolans Project will encompass a mine, process plant (comprising beneficiation, extraction and separation plants) and related infrastructure.

The deposit contains a JORC 2012-compliant mineral resource of 56m tonnes at an average grade of 2.6% total rare earth oxides (TREO) and 11% phosphate (P2O5) that extends to 215 metres below the surface.

During its quarterly activities report late April, the company claimed to be in a strong cash position with $33.5m to continue Front-End Engineering Design (FEED) with Hatch in line with schedule.

Included within a string of recent (price sensitive) announcements by Arafura include a (MoU) offtake agreement of 1,000-1,500 tonnes per annum of NdPr Oxide over a seven-year term, which assuming it proceeds, will start in 2025.

Mid-March the company was awarded grant funding of $30m under the Federal Government’s Modern Manufacturing Initiative (MMI) to help build a $90.8m rare earth separation plant at its Nolans project.

The Nolans separation plant is being flagged as the first of its kind in Australia and the second outside China, producing separated rare earth oxides and enabling the development of diversified rare earth supply chains.

The mid-cap miner has been on a strong ascent – up 146% over one year – on the back of what appears to have been a continuum of positive recent announcements.

The stock was up around 25% in July after a favourable quarterly update on NdPr pricing which closed the quarter at US$139/kg.

Based on Morningstar’s fair value of $0.52 the stock appears to be undervalued. 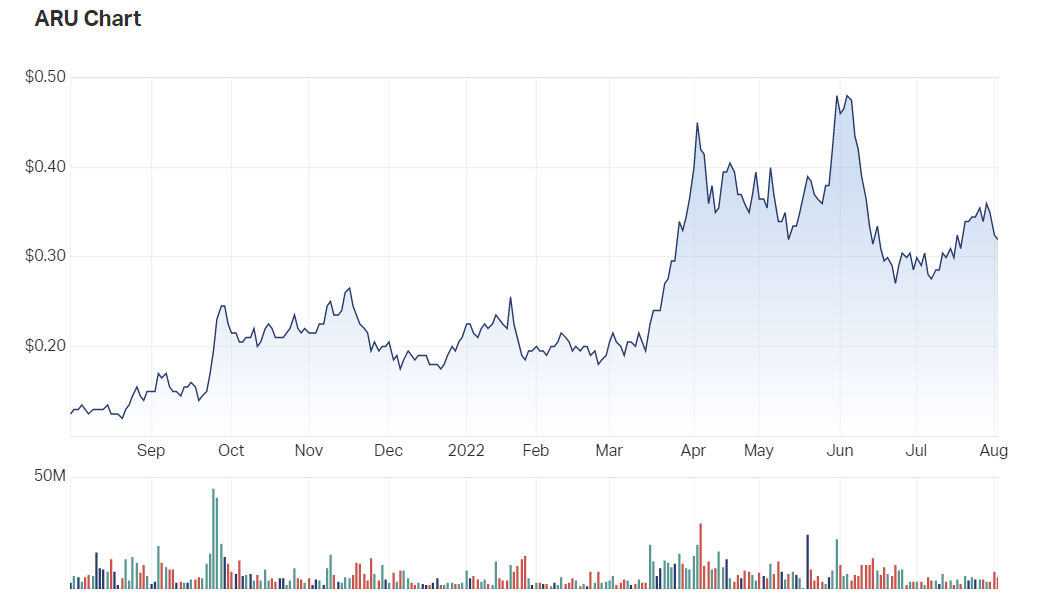 From gold to REEs, Dateline Resources can’t stop having a good run this year