Following revelations last week that ANZ Bank’s (ASX: ANZ) cash profit had fallen by -3% to $3.1bn for the first six months of FY22, Westpac (ASX: WBC) this morning followed suit by announcing that cash earnings ($3.1bn) were down -12% compared to the first half last year, but beat Bloomberg's consensus estimate by 6.9%.

In addition to tough competition in the mortgage market, management attributed the decline in cash earnings over the year to higher bad debt provisions and competitive pressures on net interest margins (NIM) which contracted to 1.85%, down from 1.98% six months earlier, which pushed revenue down -3% for the half to $10.2bn.

The board lifted the bank’s interim fully-franked dividend to 61c, (to be paid on June 24) which was higher than the 59c a share analysts had expected.

Commenting on today’s announcement, the banking giant’s CEO Peter King pointed the market to cash earnings which were 71% higher over the previous half, due to the reversal of an impairment charge.

While King also noted that asset quality has improved and most credit quality metrics are back to pre-covid levels, he flagged increased overlays in the bank’s provisions for supply chain issues, inflation, expectations of higher interest rates and recent floods.

"However, the Australian economy is robust. Consumer spending may be tempered by higher prices and higher interest rates," King said.

However, the positives of strong household and business balance sheets, combined with the continued reopening of international borders and local economies, will likely increase economic activity,” King noted.

King also expects a cooling in demand for housing, courtesy of rising interest rates to contribute to a moderation in house prices next year.

He reminded investors that rates are moving from a very low base with the bank having already assessed loan applications on higher rates, consistent with regulatory requirements.

King also reminded investors that despite a severe contraction in its interest margin, the bank had cut costs faster than it lost revenue and maintained its cost target of $8bn by FY24.

“The next big step is exiting super and platforms and we are well progressed,” King noted.

“To improve performance, we are digitising customer journeys, improving customer service, growing in our core markets and resetting the cost base.”

Consensus on Westpac is Hold

Based on Morningstar’s fair value of $29.29, the stock appears to be undervalued. 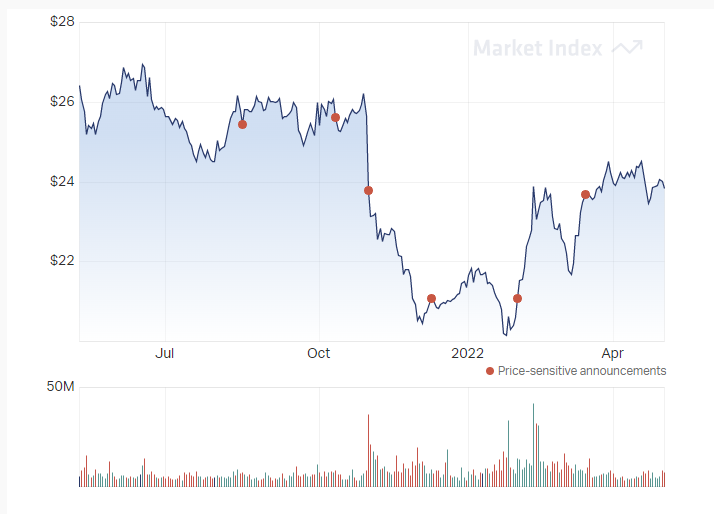