After watching the company’s the share price tank by around -30% over the list six months, James Hardie should have received some support from the market this morning following the release of what was a strong fourth quarter result.

However, not even news of above market growth and reaffirmation of guidance could stop the building products giant from being -3.47% lower at the close.

At face value the result was good

The globally adjusted EBIT margin of 23.3% was achieved through “operational improvements and the delivery of a high value product mix, partially offset by high inflation and our ongoing reinvestment in growth initiatives," the company noted.

However, the market appears have been somewhat touchy about the group’s near-miss on consensus estimates.

What’s also likely to have played on the minds of investors’ today is the number of senior management exits since the sacking of CEO Jack Truong in January.

It’s understood that Truong had created a "hostile" work environment.

“Our EBIT margin expanded 220 basis points to 29.7%, an exceptional result underpinned by delivery of a high value product mix that helped to offset high inflation and ongoing reinvestment in growth initiatives,” Wiens noted.

Based on the continued, strong execution of the global strategy across all three regions – and largely underpinned by another strong performance in North America - management reaffirms fiscal year 2023 adjusted net income guidance range of US$740m and US$820m.

The comparable prior year adjusted net income for fiscal year 2022 was US$620.7m. 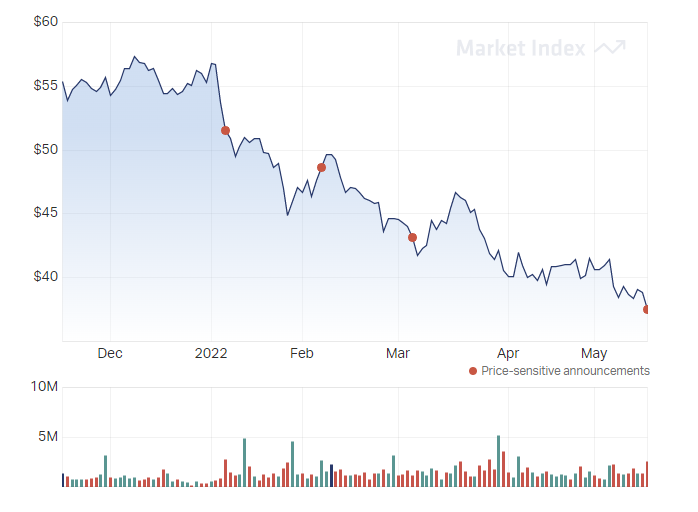 Based on Morningstar’s fair value of $42.48, the stock appears to be undervalued.

Based on the brokers that cover James Hardie (as reported on by FN Arena) the stock is currently trading with 45.2% upside to the target price of $54.44.

While the company appears to be firing on all cylinders, a possible cloud mooted by Intelligent Investor is what inflation and higher interest rates might mean for margins and the demand for housing products.

Given that the stock is has almost tripled since Intelligent Investor upgraded two years ago, the fund manager remains comfortable with Hold.

UBS believes the company's guidance is achievable and retains the Buy rating and $58 target price.

Ord Minnett foresees no slowdown in building demand and retains an Accumulate rating and $54.50 target price.