Podium Minerals Ltd (ASX: POD) has notified the market that stage 10 exploration confirms the small-cap explorer’s expectation that both the grade and thickness of the reef extends at depth.

Current Stage 10 assays show a 100% success rate on intersecting PGM reef, with most of the results above or in line with projected orebody widths and grade.

“Regular zones of significant high-grade within these intersections such as seen in PRRC208 that hosts a 2m intercept >5.0g/t 3E PGM add to an already strong story,” he noted.

High-grade PGM ore-zones, proving ounces at depth and strong progress on our metallurgical testing are important steps for Podium as we head towards a scoping study and our goal of becoming Australia’s First PGM producer.”

From a geological perspective, the company notes the location of the reef hosted within the ultramafic rocks adjacent to the contact between the ultramafics and the stratigraphically younger mafic volcanics shows no sign of diminishing.

Each of the intercepts unearthed during stage ten will now be tested for the presence of rhodium, iridium, and base metals to support Podium’s PGM resource upgrade.

Drilling which started mid-June is expected to continue across the expanded target across 50 holes throughout July and August this year.

Around 15 holes stopped short of planned reef intercepts due to swelling clays and fibrous veins and are being extended with diamond core tails to achieve full reef intercepts.

Meantime, all samples from the 35 RC completed holes have been transported to Perth for initial 3E PGM analysis.

All intersections are within fresh (sulphide) rock and selected samples are being re-assayed for 5E PGM and base metals. 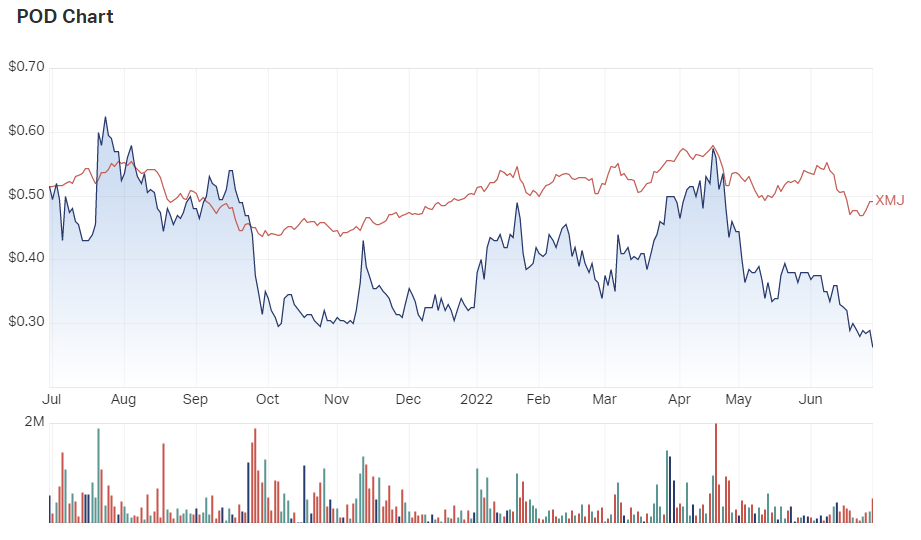 Management notes the intercept in PRRC208 is exceptional in that its grade result is substantially higher (around 20% higher) than the upper most limit of the expected grade range for the Exploration Target.

The potential for high grade zones is known to exist in the current inferred MRE down to 150m vertical, these zones will be better defined with closer spaced infill drilling.