The Weelarrana Manganese Project sits within the boundaries of permit E52/3878 and covers three different Manganese Areas—1, 2, and 3 respectively. 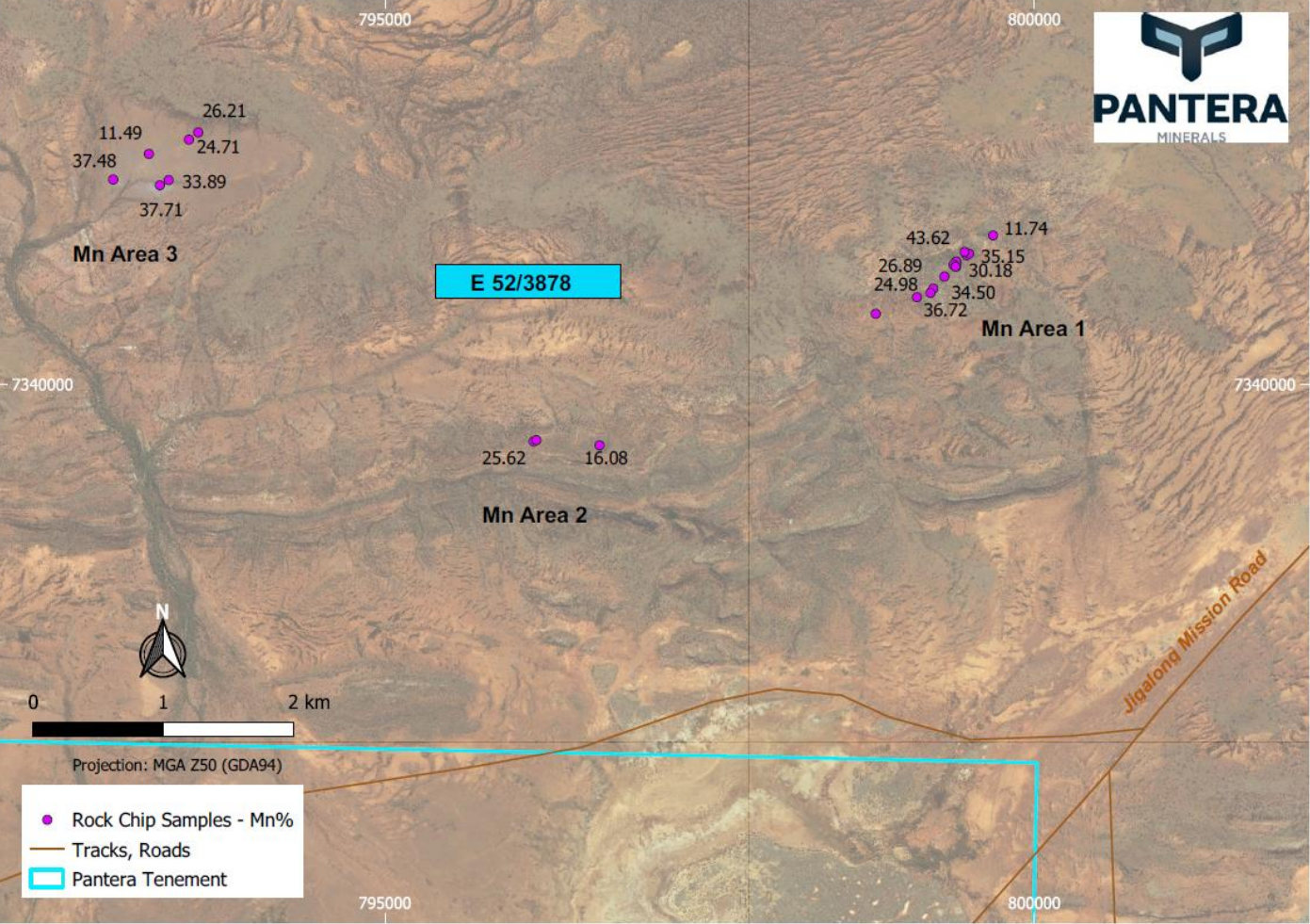 Manganese Area 1 contains evidence of deposits first identified by Pilbara Manganese in 2012 which saw 4 rock chip samples produced with grades up to 42% manganese and a 280m strike of outcrop mineralisation.

Further mapping now confirms these rock chip results, as well as 800m of strike outcropping to subcropping manganese mineralisation with a vertical thickness of 2-5m and two manganese horizons identified. Rock chip grades in this second discovery have reached up to 43.6% manganese.

Mineralisation, on the whole, remains flat and close to the surface. Accumulation varies from large nodules of manganese to banded fine grain shale replacement manganese with the company eyeing the Ilgarari Siltstone directly above the Calyie Sandstone.

A heritage survey for Manganese Area 1 will commence later this month with RC drilling expected to occur in June 2022 with a 1500m program planned and waiting.

Manganese Area 2 is located 2.3km to the west of Area 1 and along the same contact between the Calyie Sandstone and Ilgarari Siltstone.

Rock chip grades up to 25.6% were discovered in two samples initially reporting manganese of less than 10%. The company believes nodular manganese to be more present within Area 2 before terminating to the west against a northward fault.

Manganese Area 3, located a further 3.4km northwest of Area 2, is situated within a folded sequence of the Ilgarari Siltstone with sporadic outcropping, Pantera reports. Area 3 occurs over an area of 900m by 450m, the company is awaiting to determine strike extent and vertical thickness. 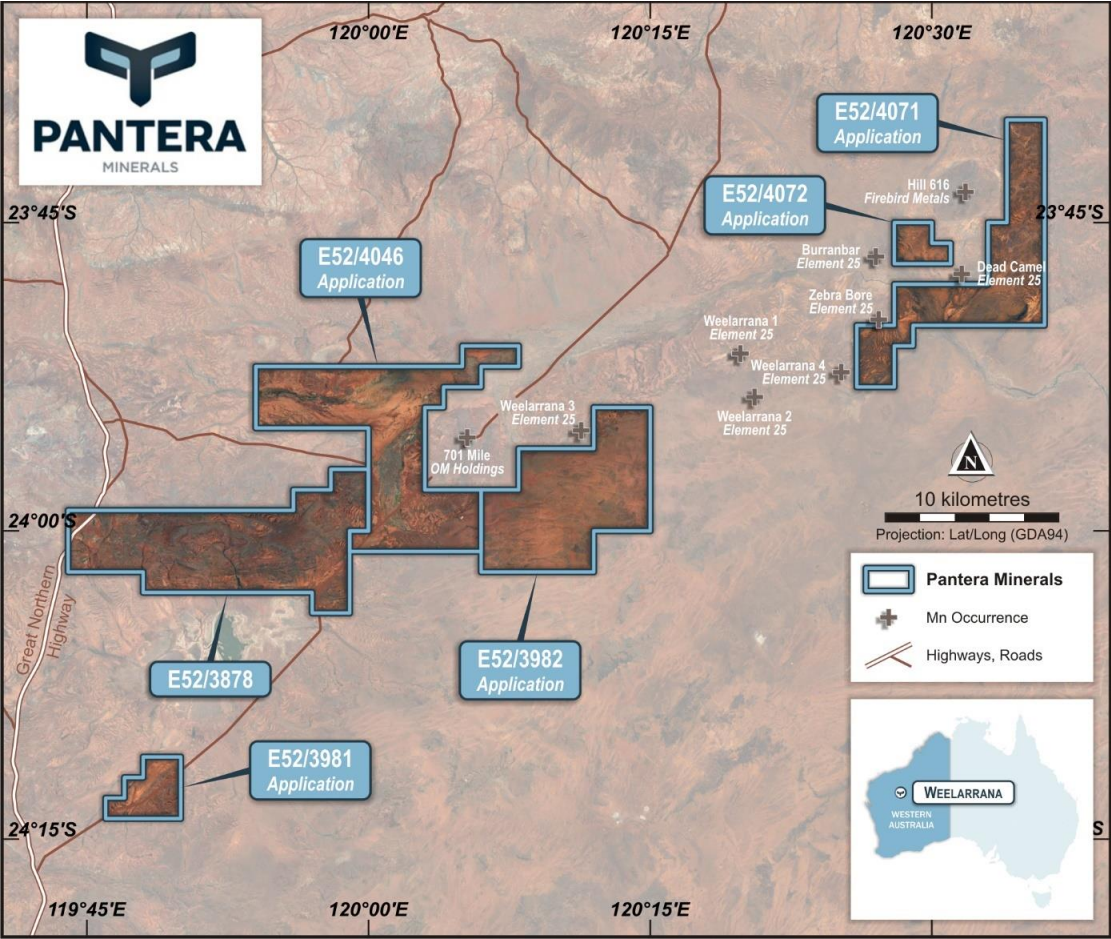 A map showing tenements under application by Pantera Minerals

Pantera Minerals is seeking to expand its total project acreage with the submission of three new tenement applications totalling an additional 357sq.km which consolidate the company’s position in the area.

Included is tenement E52/4046, a 203sq.km prospect bordering E52/3878 and targeting manganese mineralisation though to extend to the east and nearby OM Holdings’ (ASX:OMH) 701 Mile Manganese Project.

52km to the east of Pantera’s existing acreage is a tenement E52/4071, a 138sq.km area prospective for manganese mineralisation within the Balfour Formation; a geological asset home to Firebird Metals’ (ASX:FRB) Hill 616 Project.

All tenements are easily accessed all-year round due to existing roads and tracks. 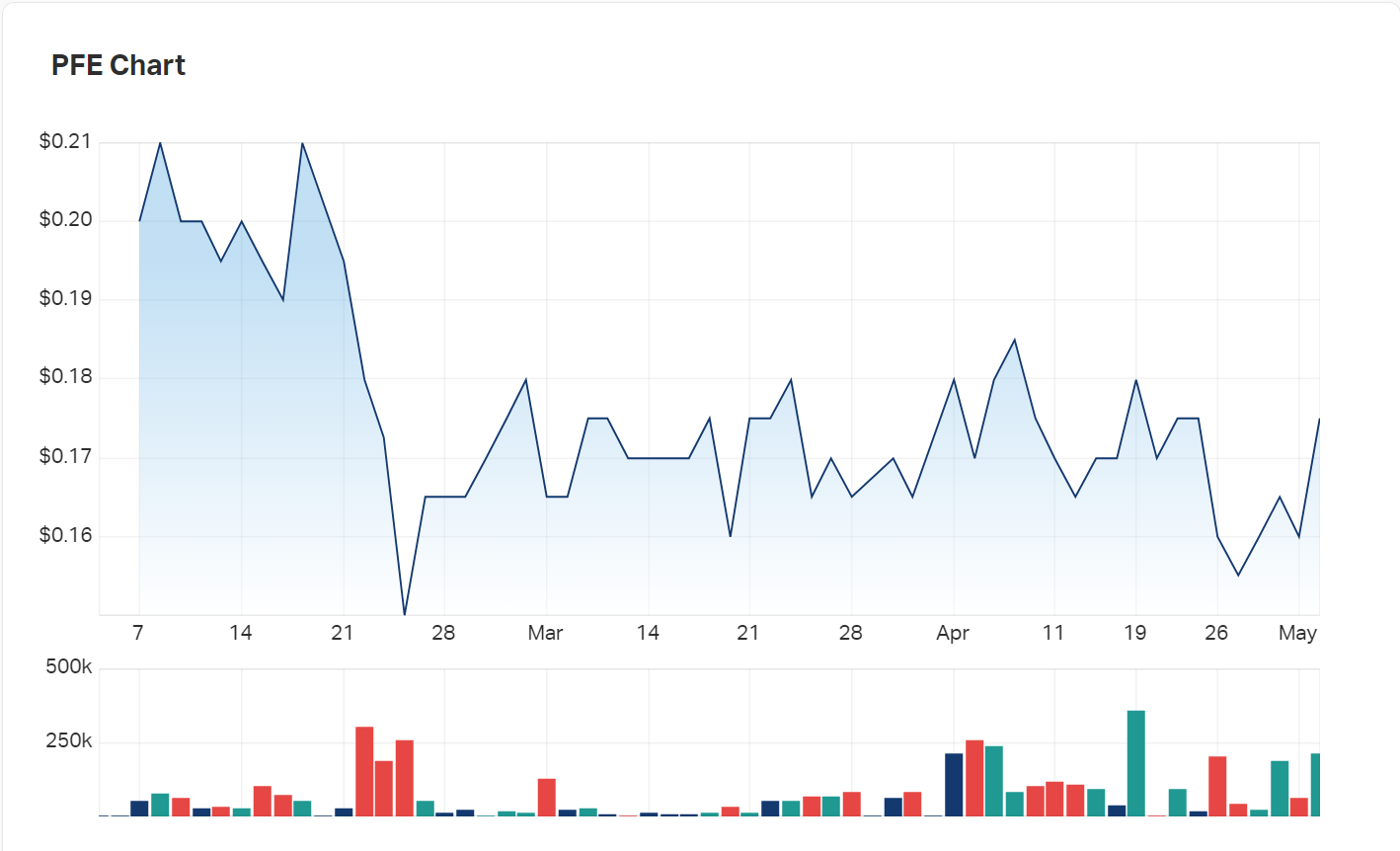