After taking a robust lithium outlook the broker doubled its prior 2023 price forecast for spodumene to US$5,000/t.

Ord Minnett’s hydroxide and carbonate estimated have lifted 50% and 60%, respectively and the broker’s long-term forecast rises by 18%.

While Pilbara’s share price has struggled – relative to its peers – since the start of the year, Fairmont Equities believes that as one of the country’s largest producers, Pilbara may have finally turned the corner.

“The downtrend from earlier this year has now been broken and we believe that it is now starting a new uptrend which should see it shortly trade to all-time highs,” the broker noted.

Despite losing ground late January, Pilbara’s share price started to bounce higher mid-March and since then shares have risen from $2.57 to $3.61.

As one of Australia’s biggest hard-rock lithium miners from its Pilgangoora operation in the Pilbara, the company is planning to lift production of lithium-rich spodumene concentrate to more than 1m tonnes annually.

The estimated capital development cost of the envisaged demonstration plant is between $50-70m.

While Pilbara is encouraged by the results to date from the Scoping Study, contributing engineering is still considered to be at an early stage of development.

Outgoing Pilbara CEO Ken Brinsden believes the company is onto a winner with this project. But he suspects it will be a long-term play, especially given the small amount of lithium phosphate sold around the world today.

Commenting recently on pricing, Brinsden was unambiguous in his expectation for it to remain strong.

“A mine takes five to seven years to get up and running. You can build a chemical plant and a car plant in less than two years … so it’s going to take quite some time for the mines to catch up.” 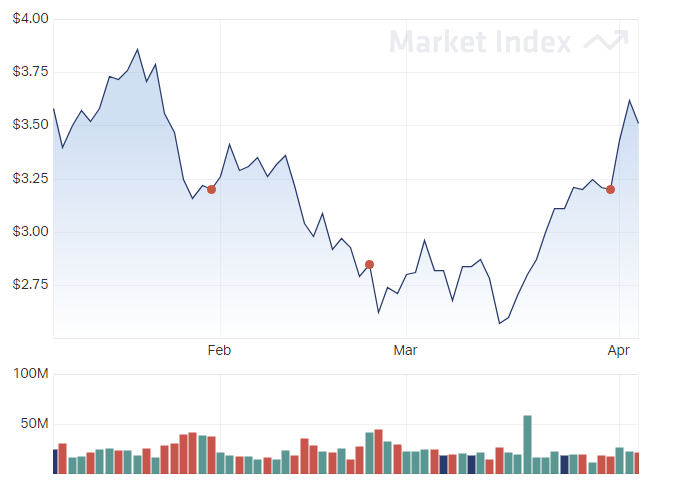 Based on the four brokers that cover Pilbara (as reported on by FN Arena) the stock is currently trading with 12.2% upside to the target price. These brokers are divided equally between Buy and Neutral recommendations.

The broker’s Outperform rating is unchanged (target price $4.30) and regards the positive scoping study at the Mid-Stream Project as an opportunity to capture more value along the lithium value chain.

While Credit Suisse favours Allkem (ASX: AKE), the broker notes that Pilbara should enjoy a premium over Allkem given a strong track record and management. Credit Suisse retains a Neutral rating with the target price increasing to $3.90 from $3.20.

Consensus on Pilbara is Moderate Buy.

Based on Morningstar’s fair value of $3.15, the stock appears to be overvalued.

The stock was -3.04% lower in early afternoon trading.