Unless you’ve been living under a rock, you’ll know full well that labour shortages, especially in WA, have played havoc with the ability of companies within resources sector to maintain, let alone initiate new projects.

BHP (ASX: BHP) has by no means been immune to the skills drought, with a shortage of train drivers, and virus-related absenteeism in WA creating the biggest headache.

While today’s quarterly activities report has reassured investors that the despite these challenges, the jewel in the big miner’s crown, iron ore, is still on track to meet its target for the year to June 30 - the share price was still trading -2.81% lower at noon.

Contributing to this outcome was record production from the MAC hub with the continued ramp up of the South Flank.

In the first three months of 2022, BHP exported 67.1m tonne of iron ore from WA, a shade more than in the same period of last year, yet a shade under the 68m tonnes UBS had forecast.

According to Platts, the benchmark price for ore with 62% iron was $US150.70 per tonne yesterday.

Meantime, WA’s labour shortages led BHP to lower full year nickel production guidance by -10%. While BHP downgraded full year copper production by around -8%, much of this was due to challenges in Chile.

At the company’s premium copper mine is Escondida in Chile, management noted that production was -13% lower than the same time last year and the mine’s full year production would be between -4% and -5% lower than previously expected.

Management also suspects high absentee rates, caused by the pandemic and rising social unrest in Chile, may continue in coming months following the election of the country’s new government.

Social unrest aside, Escondida along with other Chilean copper mines, have been a longstanding moving targets by Chilean government agencies for allegedly damaging the environment through its extraction of ground water in the high deserts of Chile.

Meantime, BHP’s Ecuadorian junior copper explorer, SolGold has released a feasibility study - into its Cascabel project - which suggests it could be one of the world’s lowest cost copper mines.

Given that it would be largely powered by hydro-electricity, the mine is also expected to have a very low carbon footprint.

Due to lower rainfall and a strong operational performance, BHP’s metallurgical coal production rose 20% quarter-on-quarter to 10.6Mt, with year-to-date production now down only -2%.

Queensland coal sales were 24% higher than in the final three months of 2021, with BHP clearly capitalising on record prices for coking coal.

Top quality hard coking coal BHP sells from Queensland were fetching a whopping $US514 per tonne, compared with $US114 per tonne in May last year.

It’s interesting to note that coking coal had never been above $US379 per tonne until September.

BHP’s Chief Executive Officer, Mike Henry noted that market volatility and inflationary pressures have increased further due to the Russian invasion of Ukraine.

“We continue our work to mitigate cost pressures through a sharp focus on operational reliability and cost discipline," Henry noted.

“While we expect conditions to improve during the course of the 2023 calendar year, we anticipate the skills shortages and overall labour market tightness in Australia and Chile to continue in the period ahead.”

Due to a targeted increase in the proportion of higher quality coal - to capture more value from the record high prices for higher quality thermal coal - BHP also reaffirmed its full year unit cost guidance for WAIO, Escondida, and Queensland Coal. 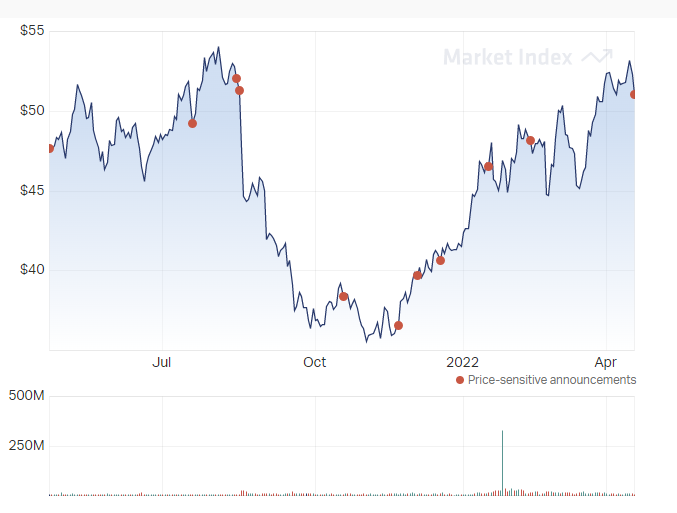 Based on the brokers that cover BHP (as reported by FN Arena) the stock is currently trading at -2.8% downside to the target price of $49.56.

Despite expecting growth in iron ore pricing to slow, Morgans recently (25/03/22) upgraded BHP to Add from Hold, in the expectation that supply tightness will continue to support continuing strong earnings in the sector.

While pressure is likely to be felt from surging fuel costs and labour and supply constraints, the broker doubts these will have a significant impact on pricing and increases the target price to $51.80 from $48.70.

Citi and Credit Suisse both retain Neutral ratings on BHP with targets of $48 and $44 respectively.

Macquarie retains an Outperform rating, and target price of $61.00 and notes the demerger value has increased more than 50% for BHP Group shareholders given Woodside Petroleum's share price strength.

Consensus on BHP is Moderate Buy.

Based on Morningstar’s fair value of $51.90, the stock appears to be fairly valued.