While Suncorp’s (ASX: SUN) share price staged a small rally late June, following suggestions the company may demerge its banking unit, the market now has to second-guess any material impact from plans to increase its natural hazard allowance.

Up from $1.1bn last year to $1.6bn, the increased natural hazard allowance is a direct response to an escalation in claims, and broader recognition that catastrophic (CAT) events are becoming more frequent in Australian.

Local insurers are currently bracing themselves for a new wave of East-Coast related flood claims.

The Bureau of Meteorology has warned residents on the Mid North Coast and parts of the northern tablelands to prepare for flash flooding later this afternoon.

Flood insurance at a price

Ironically, Suncorp’s decision to raise its natural hazard allowance coincides with a pending decision by the Insurance Council of Australia (ICA) to re-classify the NSW floods “catastrophe’ in insurance terms, after worsening conditions overnight.

In an attempt to lay some preparatory warnings for its members, the ICA reminded the market that while insurers would continue to insure properties in flood prone areas, this would “come at a price”.

Higher costs to homeowners are the knock-on effect of insurers (like Suncorp) being hit with much higher reinsurance costs.

While it’s too early to estimate claims from the current flood, Johnston expects volumes to increase significantly over coming days.

Higher reinsurance costs aside, the nature of the reinsurance program now required insurers (like Suncorp) to carry more of the financial burden from higher claim volumes before reinsurance kicks in.

In light of suspicions reinsurers are less attracted to Australia, due to an escalating risk profile, Johnston has petitioned the government to make insurance tax-free.

Johnston sees this outcome as going some way to ring-barking (flood) insurance affordability, as insurers' takes control of their own supply lines in the face of rising inflation.

Best estimates suggest GST, stamp duty and the emergency services levy represent between 30% and 45% of premiums sold in Qld and NSW.

Based on Russell’s numbers, new arrangements would produce net losses around $200m higher versus the previous period. 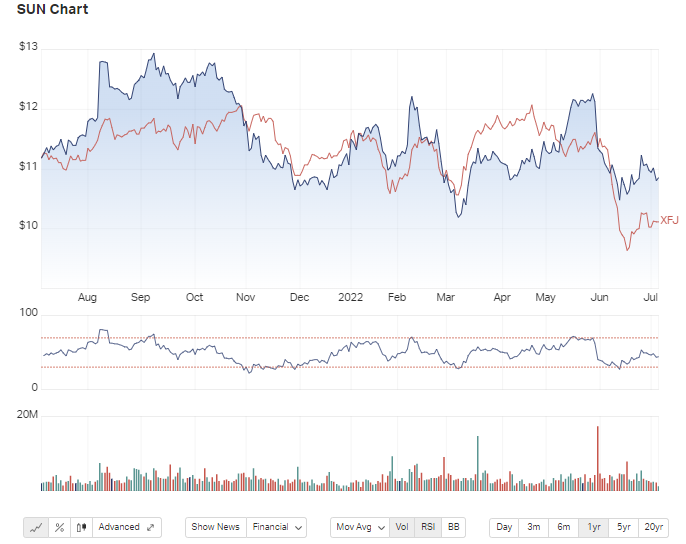 Suncorp’s share price was up 0.46% at the close today.

Consensus on Suncorp is Moderate Buy.

Based on Morningstar’s fair value of $12.87 the stock appears to be undervalued.

Based on the seven brokers that cover Suncorp (as reported on by FN Arena) the stock is currently trading with 24.0% upside to the target price of $13.49.

But the broker suspects the increased CAT budget is still too low, and retains an Underweight rating, and target price of $10.85, (05/07/22).

Meantime, Ord Minnett and UBS which also updated early this week, both maintain Buys on the stock, with target prices of $14 and 14.40 respectively, but suspect changes to the reinsurance program will impact margins.