Despite announcing the commencement of drilling at the Apus-1 well, trading in Carnarvon Energy (CVN) remained decidedly flat with the share price down -0.78% at 1 pm AEST.

The Apus-1 well is located in the WA-437-P exploration permit that is operated by Santos (ASX:STO) with an 80% stake, while Carnarvon holds the remaining 20% interest.

The latest drilling at Apus-1 is targeting a gross mean combined recoverable volume of 235m barrels of liquids and 408bn cubic feet of gas in the Caley and Milne Members.

The target reservoirs have previously been proved in the Dorado and Pavo discoveries, with the Caley Formation sands having been flow tested at equipment limits of around 11,000 barrels of oil per day in the Dorado-3 well.

All this sounds pretty exciting, but what my have curbed the market’s enthusiasm over drilling at the Apus-1 well is the probability it may disappoint.

In short, Carnarvon is providing no guarantees and estimates the geological probability of success at one-in-four (23%).

The Noble Tom Prosser jack-up drilling rig has started with drilling of the surface hole down to a total depth of around 175 metres, and installation of the surface conductor.

Following the setting of the surface conductor, the 17.5-inch hole will be drilled down to a total depth of around 850 metres and the 13.625 inch casing will be set and cemented in place.

The rig will then drill ahead in the 12.25-inch hole to a total measured depth of approximately 2200 metres before setting the 9.625 inch liner.

After setting the 9.625-inch liner, the rig will drill ahead in the 8.5-inch hole section through the expected reservoir interval.

No hydrocarbons are anticipated to be intersected in these hole sections.

Key risks for the prospect include hydrocarbon charge (long-range migration) and top-seal (thickness), similar to the key risks of the Pavo-1 well.

The Pavo-1 well has proven long-range migration and effective top-seal at the Pavo structure, which is further from the Dorado field than Apus. 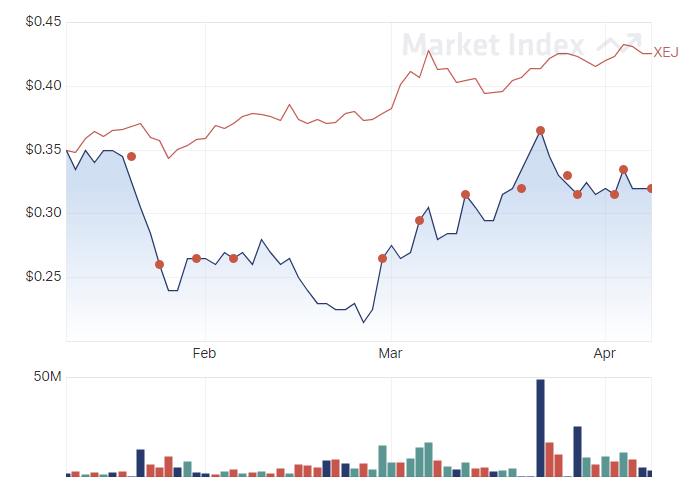 Carnarvon Energy has underperfomed the Energy Index over the last 3 months.

Based on the two brokers that cover Carnarvon (as reported on by FN Arena), the stock is currently trading with 21.9% upside to the target price of $0.39.

While Macquarie retains a Neutral rating, (target price decreases to $0.32), the broker believes a successful drilling program at Apus-1 could add a further 50-60% to its valuation.

Due mainly to higher expectations for exploration expenses and share of joint venture losses, Ord Minnett has trimmed its FY22 net profit forecast.

Consensus on Carnarvon is Strong Buy.

Based on Morningstar’s fair value of $0.41, the stock appears to be undervalued.