After raising $1.3bn for its failed takeover crack at UK gaming software company Playtech, Aristocrat now plans to return up to $500m to investors via an on-market share buyback.

CEO Trevor Croker plans to take an “opportunistic” approach to the said buyback, effective from June.

Beyond returning cash to shareholders, what also captured the market’s imagination today were revelations that the group wants to advance its own real money gaming (RMG) strategy.

Despite Aristocrat’s Failed $3.9bn bid for Playtech, the group still plans to become the global leader in the burgeoning online gaming sector.

Further acquisitions are clearly in Aristocrat’s sights, with Croker favouring a “build and buy” strategy to develop “scale in the online RMG space, which would provide further channels for the group’s world-leading content.

“Our ambition is to be the leading gaming platform in the global online RMG industry, and we anticipate being live with i-Gaming products in two jurisdictions in the US by the end of calendar year 2022,” Croker noted.

While the group will have $800m to invest in its build and buy strategy after executing the $500m buyback, Croker made it clear to investors that this was by no means an upper limit on its growth-by-acquisition strategy.

“We’re not constrained to a number, but we are very disciplined in our approach to M&A…our sustained investment in talent, technology and product enables us to continue to take share wherever we play and delivered significant top and bottom-line growth in the first half of fiscal 2022,” Croker concluded.

Highlights of the group’s six months to March 31 result announced today include:

Aristocrat has entered the second half with solid fundamentals, strong operational momentum, and a robust balance sheet with gearing (net (cash)/debt to earnings) further reduced to (0.3x), and in excess of $3.3bn of liquidity available as at 31 March 2022.

Aristocrat’s plans for continued growth over the full year to 30 September 2022, include: 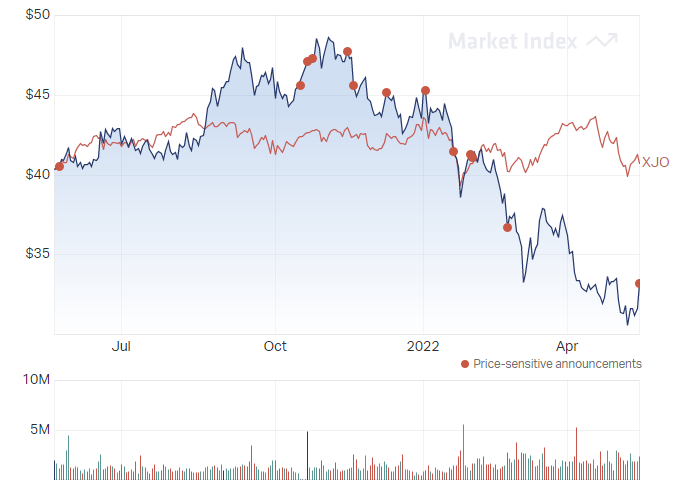 Consensus on Aristocrat is Moderate Buy.

Based on Morningstar’s fair value of $38.32, the stock appears to be undervalued.

Based on the brokers that cover Aristocrat (as reported on by FN Arena) the stock is currently trading with 39.9% upside to the target price of $46.25.

With reported financials well above the estimates, the broker retains an Accumulate rating and target price of $49.00.

Goldman Sachs, which is Buy rated on Aristocrat with price target of $43.00, notes today’s digital revenue numbers confirm the ongoing shift of the group’s revenue to its commission free PC based Plarium Play platform, now accounts for 27% of Plarium revenues, up from 20% in FY21.

The broker also expect penetration of RAID on the group's platform to be significantly higher.