Given that 81% of electricity in NSW in 2019–20 came from non-renewable sources such as oil, coal and gas, the battery project is expected to improve energy security, especially in regional NSW.

When fully operational next year the project is expected to help push power prices down, and help stabilise the system, which is particularly important for areas such as Broken Hill that are at the edge of the electricity grid.

“As Australia moves forward with its energy transition, we know that firming technologies like batteries play an important role in energy storage and supporting the energy supply,” Brokhof said.

The 50MW/50 MWh lithium-ion large scale battery will be equipped with what are called ‘grid-forming inverters’ to improve system strength and support increased levels of renewable energy generation in the area.

To the uninitiated, advanced inverters enable grid scale and grid connected batteries to provide system stability services that are traditionally provided by synchronous generation, such as coal or gas.

Finding new ways of providing stability to the electricity system is expected to help the grid operate with higher shares of variable renewable energy.

Brokhof believes Broken Hill’s unique edge-of-grid environment provides an ideal location for this advanced inverter technology to demonstrate how it can facilitate further penetration of renewable energy generation, while also adding to the stability of the wider electricity network.

“We are particularly interested in seeing how AGL’s Broken Hill battery will utilise and demonstrate advanced inverter technology in a weaker section of the electricity grid.”

Meantime, broker sentiment toward AGL remains mixed with half recommending Hold and half recommending Buy. Based on the seven brokers covering ALG (as reported on by FN Arena) the stock is trading with 2.4% upside to the target price.

Ord Minnett retains a Buy and has the the highest broker price target on the stock of $8.75.

The broker believes the alacrity with which a second takeover offer was rejected only confirms the appeal of AGL Energy's retail business, and notes recent electricity pricing strength only adds value.

By comparison, Morgans believes AGL remains a problematic investment proposition ahead of its demerger, and suspects the company's component parts are likely to attract investors who have environmental priorities that are at polar opposites. The broker retains a Hold rating and the target falls to $7.24 from $7.48.

Today's announcement did little to capture the market's imagination with the share price up around 1% at the close. 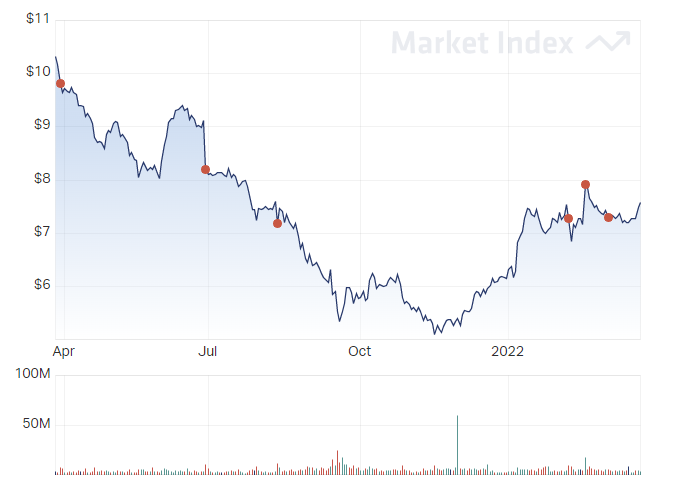 AGL's share price has struggled over past 12 months, but managed to find some upward momentum last November.