Wall Street was green for a second straight session ahead of the Fed’s pivotal interest rate decision, the RBA surprised investors with a 25 bps rate hike, Beijing braces for a spike in covid cases, ride-share stocks slide on Lyft earnings and Citi traders caused a Swedish stock flash crash.

Stocks are steadying ahead of the Fed's decision and closely watched commentary. It feels like anything could happen.

Investors shouldn't get too excited about these small green days. "Rallies have been nothing more than oversold counter trend snap backs. Volatility risk remains high. Put volume and sentiment may support a rally off the lows, but a reliable bottom has not yet to be established," said US trader Mark Minervini.

Nothing too exciting happened on the ETF front, as most were up or down between 2% and trying to stabilise after the market's recent selloff.

The VanEck Rare Earths/Strategic Metals ETF is trying to stabilise after an almost -30% correction from April highs.

The ETF tracks the performance of companies mining, refining and recycling rare earths and other strategic minerals. Its top 5 holdings include local names like Lynas, Pilbara Minerals and Allkem.

The sector was bolstered by a positive earnings release from US-listed lithium company, Livent. The company said it had no new capacity coming online this year, and all the upside was coming from pricing.

The Biden administration announced on Tuesday that it will provide US$3.1bn in funding to support efforts to make EV batteries and components in the US. Separately, the Department of Energy said an additional US$60m will be available to support the reuse and recycling of used EV batteries.

The ETF is in a rather fragile position, previously slicing through key support areas like the 200-day and $96 level (red band) with ease. Until the ETF can reclaim such support areas, small green days shouldn't be taken too seriously. 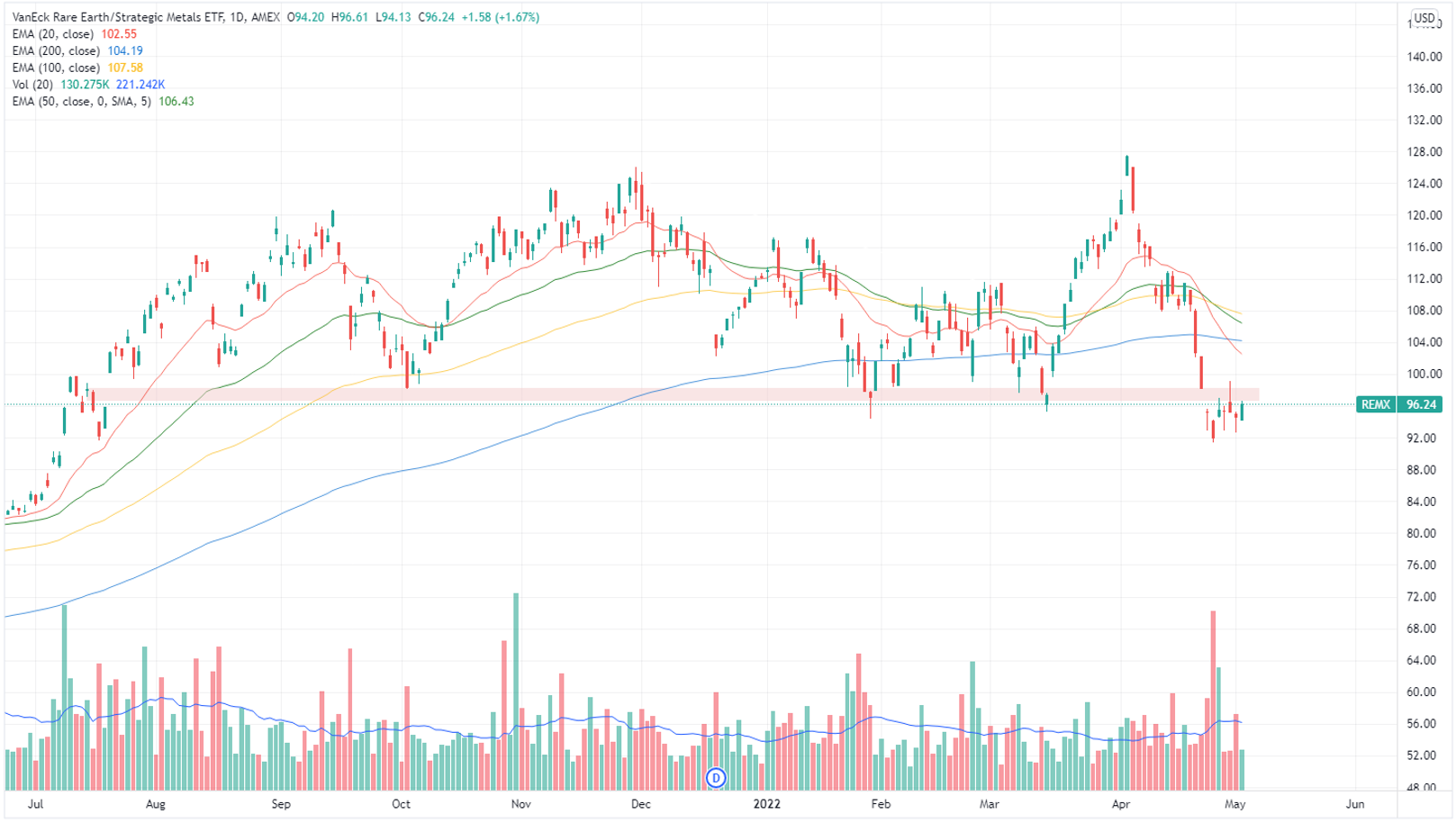 Nevertheless, the small overnight bounce could see some positive flow for local names.

OPEC+ is due to meet on Thursday to discuss oil output. The petroleum organisation is widely expected to rubber-stamp next month's output increase (that they probably won't hit anyway).

China remains a key risk to oil sentiment as the nation sticks to its strict 'zero-covid' approach that mass tests and shuts down entire cities on just a small handful of cases.

New cases in Beijing climbed to 62 on Monday and around 450 in the past two weeks.

Other near-term risk factors for oil prices include: