Having concluded that the pathway to gold production in the next quarter at the King of the Hills (KOTH) gold project in WA has been de-risked, Morgans has upgraded its rating on gold miner Red5 (ASX: RED) to Add from Hold.

Morgans expects the share price to continue to re-rate later this year as investors follow the broker’s lead and start to wind back their risk discounts.

Meantime, Ord Minnett which also has a Buy on Red5, expects the discount Red 5 has been trading at, relative to peers, to unwind as the company approaches maiden commercial production.

While Ord Minnett has retained a 40c target price, the broker hasn’t not updated on Red5 since late January 2022.

Despite no additional information being released to the market, the company's share price was up 5.63% two hours out from the close today.

The share price has virtually doubled since early August 2021 when management confirmed that the development of its 2.4m ounce, 16-year life-of-mine KOTH gold project had passed the 50% project completion milestone.

Despite the challenging environment for people, equipment and services across the WA mining industry, managing director Mark Williams reassured investors that KOTH remained within budget and on schedule.

Within an update early February, Williams advised that open-pit mining has commenced at KOTH, with the company firmly on track for first gold production in the June quarter of 2022.

Red5 has a good track-record in defying the labour shortage that has held the sector back, by producing 76,104 ounces from its Darlot gold hub 100 kilometres north of KOTH project, in the previous financial year.

Following ongoing exploration aimed at extending new mining areas, the company announced late February that it had intersected up to 338 grams per tonne (g/t) gold from the Darlot Underground Mine.

Since July 2020 a total of 28,500 metres of grade control and extensional resource drilling programs have been completed, with higher grades witnessed within the magnetic dolerite while more variable grades are associated with the non-magnetic dolerite.

Commenting on the results, Williams noted: 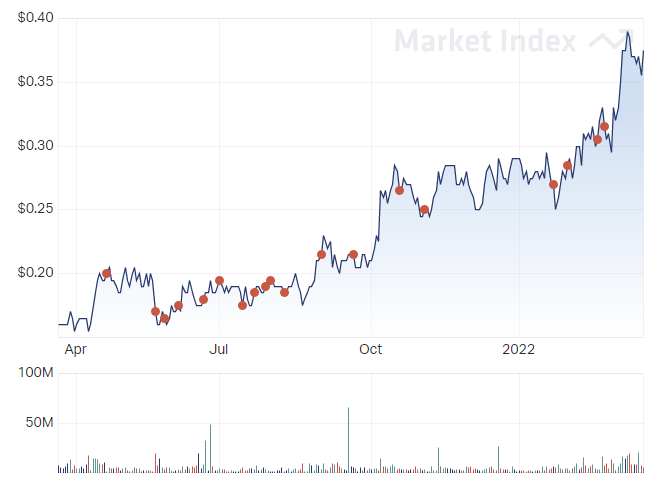