A moving Aussie dollar (A$) heralds mixed blessings for stocks on either side of the currency divide. Investors should understand some useful guiding principles when it comes to identifying the most likely winners and losers when our currency rises or falls.

While currency should never be the only determinant of stock selection, you can’t incubate yourself against currency risk with around 30% of Australia’s listed companies sourcing earnings from offshore.

That’s why you need to know the currency impact on the stocks you own.

The more direct the currency exposure your businesses have, the greater the earnings hit (good or bad) is likely to be. Everything else being equal, a 10% drop in the A$ could typically be expected to increase company earnings by a notional 3%.

A falling dollar is typically good for exporters, especially companies in agricultural and manufacturing sectors, as it boosts their price competitiveness in overseas markets.

The A$-US$ exchange rate has a significant bearing on the profitability of Australian companies that do a considerable amount of business overseas.

If the A$ shows significant strength, then profits from their foreign operations tend to decline, which in turn can have a negative effect on the price of their stock.

Key beneficiaries of a falling A$

From an earnings perspective, a weaker A$ is also expected to have a positive (earnings) effect – especially for miners and other companies with large amount of their revenues in $US – through either conversion – when exporters compete with imports in Australia – or translation – when foreign currency is converted to Australian dollars on balance sheet.

But you need to understand that the effect of falling commodity prices and reduced demand for goods and services far outweighs the translation effect of having offshore earnings.

Losers when the dollar falls

Given that currency is a by-product of global economic conditions and investor risk tolerances, cyclical stocks tend to underperform their defensive counterparts in a falling A$ environment.

Similarly, the declining value of the A$ should disadvantage importers and industrial stocks with little overseas exposure, and consequently little negative translation effect.

However, given that they often hedge their orders up to a year ahead of their sale period – using forward exchange contracts – the impact of a falling A$ on retailers can take some time to be fully realised.

Admittedly, the A$ is a long way from its record highs (US69.7c)

But assuming CBA economists’ are right, and the AUD/USD spends most of the next twelve months in a US60‑70c range, then there’s still plenty to be gained from capitalising on further falls.

If the A$ is destined to fall between US60-70 a review of opportunities outside Australia could also be timely. 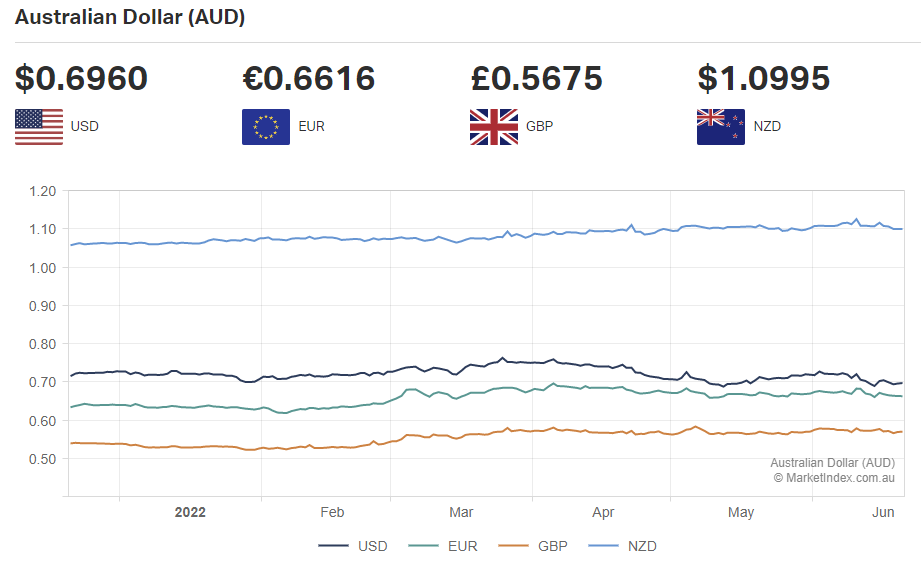