Evolution Mining (ASX: EVN) has posted a 33% boost to its cashflow quarter-on-quarter for the period ending 31 March 2022 with gold production at 148,787 ounces at $990/oz. Copper production tripled to 13,352 tonnes during a period of high demand for the commodity increasingly required in energy transition electrification initiatives. The company has also generated $54.9m in shareholder returns in the quarter.

The company expects production to increase to at least 40,000 ounces in the June 2022 quarter.

The company's Red Lake development in Ontario, free from East Australian weather events, is the prize star of this quarter’s results. So too did its WA Mungari acreage evade floods; producing 33,296oz of gold in the quarter.

However, the company also notes its debt stands at over $1bn at March 31.

Evolution expects a loss of some 20,000oz. The north wall of the pit has been compromised; works are underway to amend the infrastructure.

If these rainfall events become common, perhaps the company will stand to benefit from its Mt. Rawdon Pumped Hydro project for which a feasibility study is due in June 2023.

Its Cowal underground development, however, while similarly impacted by the floods, remains on track and on budget, with primary drilling contracts imminent.

Evolution acquired Ernest Henry in January this year and this asset is the key driver allowing Evolution to triple its copper production through the quarter to 13,352tn. Evolution notes that Ernest Henry’s combined metal production expressed on a gold equivalent basis reflects 95,217oz of materials.

In the first quarter under Evolution ownership, Ernest Henry produced 17,1833oz of gold and 13,352tn of copper. Copper sales in the quarter were at an average copper price of $14,020/tn.

While the company is currently making major gains on the back of a volatile commodities market, ore mined and processed for the quarter were reduced due to a planned eight day shutdown of a processing plant and crusher in February.

A pre-feasibility study on the extension of the Henry Ernest mine is progressing with completion expected for the end of CY2022.

On the back of its quarterly, Evolution has also noted in a separate release today that its Cue JV with Musgrave Minerals (ASX:MGV) in Murchison, Western Australia, has identified new gold lodes through a diamond drilling campaign.

The company notes follow up aircore drilling on Lake Austin has extended the company’s mineralised footprint to over 2.1km at West Island and the company perceives new basement targets onsite.

Drilling will progress through the June quarter. 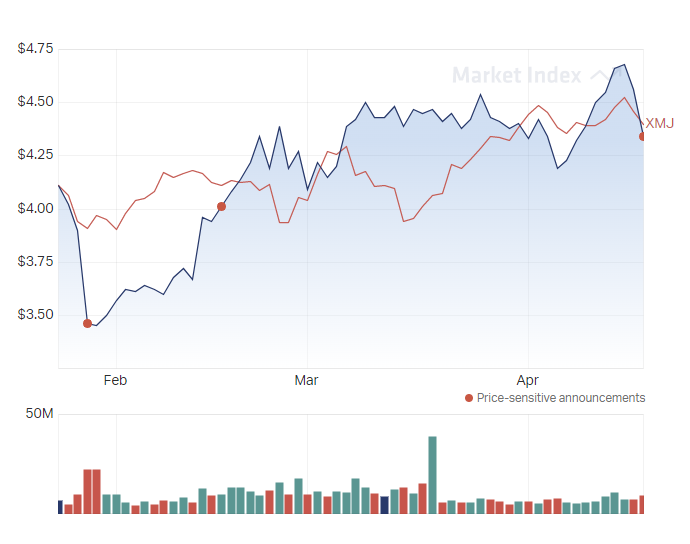