3 things for BHP, Rio Tinto and Fortescue investors to consider

There's a lot of mixed news coming out of China, which is why iron ore prices are fluctuating so violently.

Here are the three main factors to consider.

China’s National Health Commission has reported approximately 3,500 new covid cases on Sunday, the nation’s biggest outbreak since the early days of the pandemic.

China has a strict “zero tolerance” policy towards covid, willing to unleash widespread lockdowns without any hesitation.

On Monday, the Jilin province, home to around 24m people, were placed under lockdown. Residential communities in the city of Shenzhen, a city of around 18m people were also placed under "closed management", where residents are subject to rounds of testing.

So far, major companies including Foxconn, which produces iPhones for Apple, Toyota and Volkswagen have all flagged suspended operations in the affected regions.

Sources told Fastmarkets that the rising concerns over the new wave of covid cases is weakening China's demand for steel.

Only time will tell whether or not industrial activity will struggle or bounce back sharply.

Against all odds, China's industrial production rose 7.5% on-the-year in January and February, well-above economist expectations of 4.0%.

Over the same time period:

China has kicked off the year on a positive note, but March will be a major test for the economy following the sharp rise in oil and commodity prices, and the nation's latest covid outbreak.

Factors including the Lunar Chinese new year and persistent slump in the housing sector meant that people and companies were borrowing less. 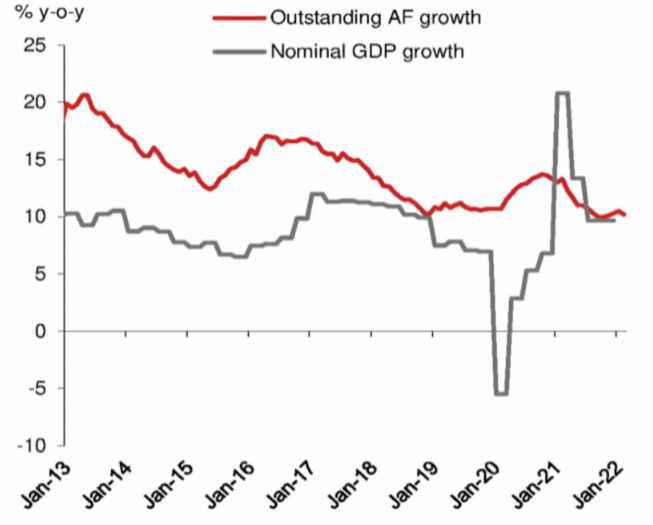 This sets the scene for more monetary easing to support the property market and broader economy.

"Recent interest rate cuts, together with partial loosening measures for homebuyers in some municipals, are expected to boost mortgage demand, which in turn may improve developers’ fund flows and ease their liquidity crunch," analysts told S&P Global Platts.

Accommodative policies for China's construction sector is good news for iron ore, as the sector typically accounts for 50-60% of domestic steel consumption, according to the Office of the Chief Economist.