23% revenue boost for REA Group: Shares down -8% at the open

REA Group (ASX: REA) was down -8.23% at the open after Australia’s largest real estate portal business reported a 23% increase ($278m) in revenue growth year-on-year for the March quarter, on the back of Australian residential business and the inclusion of Mortgage Choice, and earnings including associates up 27%.

Core operations for the nine months to the end of March include revenue of $869m and earnings (EBITDA) including associates of $523m.

Rental revenue continued to benefit from increased depth penetration and price rises, however this was more than offset by a decline in rental listings.

REA Group CEO Owen Wilson was upbeat about the residential property market outlook and cited an increasingly healthy balance between supply of properties and demand from buyers.

However, a slowdown in financial services settlements and developer project starts is expected in the fourth quarter compared with an “exceptionally” strong prior year.

“Australians transacted property at pace during the quarter as continued high demand gave sellers the confidence to bring their properties to market. We also continued to see excellent growth in our strategically important Financial Services, Data and Indian businesses,” Wilson said.

“The Australian property market is very healthy. While we are seeing housing price moderation in some areas, the strong economic fundamentals will continue to support robust conditions beyond this quarter.”

What spooked the market this morning

It seems as if the group's generally positive result has been dragged down along with the border market after shocking overnight trading in the US.

The market may also have doubts over whether Q4 volume headwinds will be more than offset by higher residential and commercial yields.

The group expects these to be underpinned by contracted price rises and increased depth penetration, the benefit of strong March volumes deferred into Q4, and growth in Data and REA India revenues.

Despite growing profit and witnessing a recovery in listing volumes, REA Group has been out of favour with the market, with the group’s share price down around -25% since the start of 2022.

At the half year, the company reported an “exceptional” performance, with core operations delivering revenue growth of 37% to $590m and net profit (NPAT) growth of 31% to $226m.

Based on the brokers that cover REA Group (as reported on by FN Arena) the stock is currently trading with 32.9% upside to the target price of $162.19.

Based on Morningstar’s fair value of $108.17, the stock appears to be overvalued. 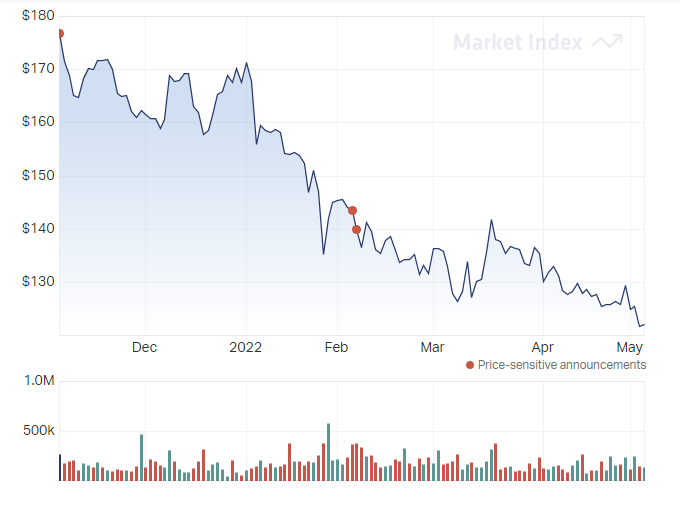