UK and Eurozone to follow the US into recession: Goldman Sachs

If the US is cantering towards recession, Goldman Sachs Research concludes that the UK and the Eurozone can’t be too far behind.

After crunching some numbers, the broker’s analysts believe the probability of a broader slump within developed economies has substantially increased. Goldman’s estimates a 30% risk of a recession in the US over the next year, while the likelihood of downturns in the UK and the Eurozone now stands at 45% and 50% respectively.

To put these numbers in context, the broker reminds investors that the average annual probability of advanced economies entering recession since the 1960s has only been around 15%.

“The risk of a downturn in the US is also elevated relative to its own history, given that recession probability has averaged around 12% since the 1990s,” Goldman’s notes.

“US recessions have become less frequent following the creation of the Federal Reserve, the anchoring of inflation expectations, and the decline in the relative importance of the cyclical manufacturing sector.”

Probability of Advanced Economies Entering a Recession Has Been Roughly 15% 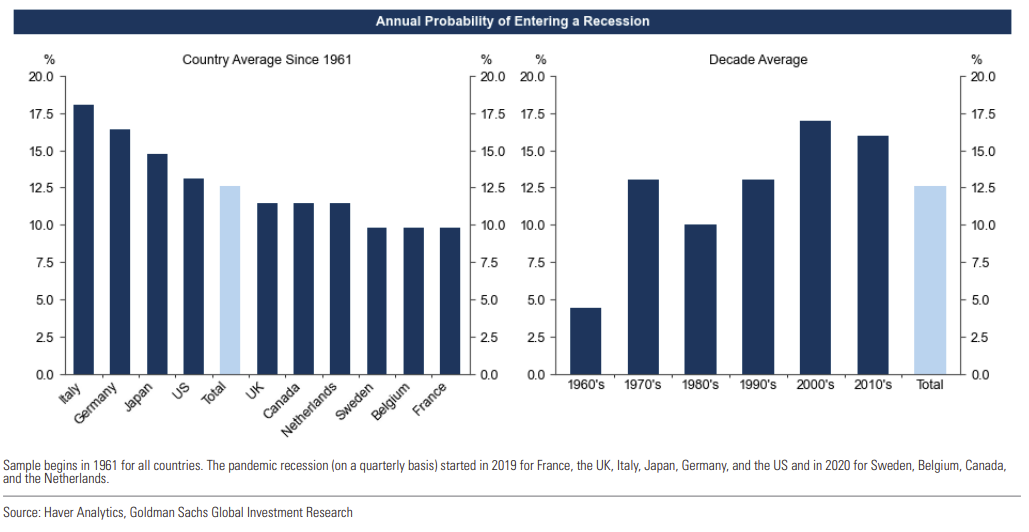 Unemployment is a key marker

What’s also important to note, adds Goldman’s is that the unemployment rate, a key marker of a downturn, has risen by 2.7 percentage points in the median advanced economy recession since the 1960s.

Median Rise in the Unemployment Rate of 2.7pp; More Severe Recessions in the UK and the 1980s

How severe will the slump be?

There are mixed signals on this one, but by Goldman’s reckoning if the economy stumbles, government officials may be less responsive than in the past.

With that in mind, Goldman's also reminds investors that measures of economic overheating - typically higher in the UK, US and Canada than in the euro area and Japan - suggests the severity could vary depending on geography.

“Persistent disruptions in gas exports from Russia would likely cause large contractions in Germany and Italy,” the broker notes.

However, Goldman’s also finds reasons to be optimistic, with the large private sector surplus pointing to a shallow recession.

“Throughout developed economies, private-sector finances have been in better shape than they usually are before a recession, and long-run expectations for price inflation and wage growth still appear to be mostly anchored,” the broker notes.

“Substantial supply side improvement opportunities remain in both global supply chains— where delivery times have shortened—and in the labour market.”

A Link Between Recession Severity and Economic Overheating…

Too late to speculate

According to the investment strategy arm of Wells Fargo, the US is entering a recession in the second half of the year, on the back of faster and more broad-based inflation than expected, which is weakening consumer confidence to spend.

Wells Fargo’s more bearish outlook is an about face from just over a month ago, when the group envisaged a mild recession and not until the end of this year.

Wells Fargo’s investment strategy arm is at odds with a broader consensus view, also held by several major Wall Street players like Guggenheim and Nomura Securities – including Wells Fargo’s own economists – that foresee a mild recession by the end of next year.

“There’s the technical part of the recession, but then there’s the meaningful deterioration in consumption and employment,” said Sameer Samana, senior global market strategist at the Wells Fargo Investment Group.

“The technical part is a first half story and the brunt of the unemployment and consumption is the second-half” of the year.”

What is a recession?

Two consecutive quarters of negative growth in real GDP is the most common definition of a recession.

US GDP fell an estimated 1.6% in the first quarter, and real-time data from the Federal Reserve Bank of Atlanta sees a drop of a similar magnitude in the three months ended June 30.

The government’s official report of a preliminary estimate won’t be released until 28 July.