Wall Street paved the way for a sharp -0.8% decline for the ASX on Wednesday.

The US 2-year Treasury yield, an indicator for short-term interest rates, rallied above 1% for the first time since February 2020.

The jump in 2-year yields further validates the prospect of at least three interest rate hikes from the US Federal Reserve this year.

Higher interest rates could take some heat out of the rebounding economy and place downward pressure on equity markets.

Energy and utilities are the only sectors trading in positive territory. 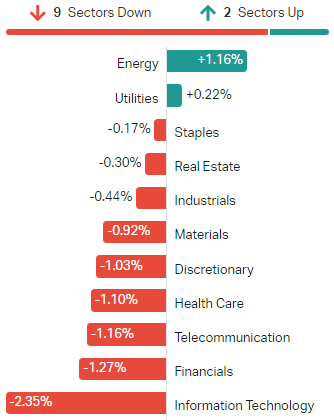 to 7-year highs of more than US$85 a barrel overnight.

Winning stocks are quite numbered on days like these, with mostly announcement driven big gainers including:

#1 - Brainchip (ASX: BRN) is the gift that keeps on giving, up another 18% after being granted a new US patent. The company’s stock is now up 192% year-to-date.

#2 - Lake Resources (ASX: LKE) was up 5.3% after confirming that its flagship Kachi Lithium Project will produce 50,000 tonnes of lithium per annum. The company’s Definitive Feasibility Study confirmed that production will almost double from 25,500 to 50,000 tonnes thanks to an increase in resource estimate from drilling results.

Tech stocks are taking the brunt of today’s selling.

Banks are not much better off, with the Big 4 banks mostly down around -1% and Macquarie Group (ASX: MQG) sliding -2%.

Overnight, Goldman Sachs tumbled -7% after the bank flagged a -13% decline in quarterly profits, weighed by a 23% spike in operating expenses.

Higher interest rates should in theory help drive margin expansion for banks. However, Goldman’s results might flag that expenses are also on the rise.

#1 - Megaport (ASX: MP1) dived -11% after a December quarter trading update. The company has a track record of reporting mid-single digit to low-teens percentage growth across revenue and customer metrics.