The ASX is up 0.45% following a turbulent session on Wall Street, where major indices gave up early gains of more than 1.5% to close relatively flat.

The US Federal Reserve concluded its two-day policy meeting, leaving interest rates on hold. The Fed signalled its plans to raise rates in March, followed by a significant reduction in its US$9tn balance sheet.

“With inflation well above 2 percent and a strong labor market, the Committee expects it will soon be appropriate to raise the target range for the federal funds rate,” the Fed’s Open Market Committee said in a statement.

The ASX is currently being buoyed by the big four banks and large cap energy and material stocks. 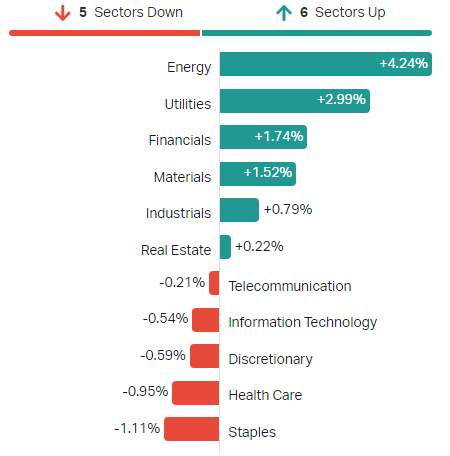 Energy stocks have topped the leaderboards as oil prices continue to trend higher. Crude oil is trading at US$87.3 a barrel, up from last Monday’s lows of US$81.9/b.

Iron ore miners are another pocket of strength as spot prices inched 0.2% higher overnight to US$138.1 a tonne.

#2 - Jumbo Interactive (ASX: JIN) is up 4.4% after acquiring UK-based lottery manager and digital payments company Starvale Group for $32.1m. Jumbo views the acquisition as “transformational” for its international expansion strategy.

#3 - Paladin Energy (ASX: PDN) is trading 5% higher after completing technical work programs for the restart of its Langer Heinrich uranium mine. The company confirmed an estimated project execution timeframe of 18 months between project commencement and first production. A decision to restart is still pending.

Gold prices tumbled overnight after the Fed laid out their plans for a March rate hike. The Fed’s aggressive stance on balance sheet reduction and hawkish tone reversed much of gold’s recent gains.

Kogan’s weak performance might also be weighing its eCommerce peers including Redbubble (ASX: RBL) and Temple & Webster (ASX: TPW), both down -2.4% and -3.5% respectively.