The local sharemarket is currently being led by the S&P/ASX Energy and Consumer Discretionary sector, up a respective 1.4% and 0.4%. 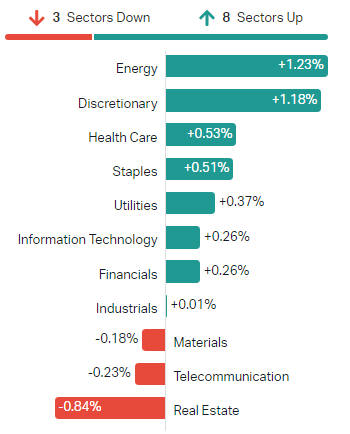 Energy stocks are rallying after oil prices locked in a fourth-consecutive week of gains last Friday.

Crude oil prices are trading around 8-year highs of US$84.7 a barrel, as investors expect the demand impacts from omicron to be short-lived.

Early stage explorer Charger Resources (ASX: CHR) is up 26% after its geochemistry program suggested a large lithium-mineralised system at its Bynoe Lithium Project.

Wesfarmers (ASX: WES) shares are up 2.3% after the diversified conglomerate expects a -10.8% to -15.1% decline in first half earnings for FY22. The earnings decline was said to be "in line with current consensus expectations.

Adbri has signed an extension for the supply of quicklime with Alcoa Australia. The deal is expected to contribute at least $25m in revenue.

Australian Ethical (ASX: AEF) is trading 5.5% higher after recording a 6% increase in funds under management for the December 2021 quarter. This provides a much needed bounce for Australian Ethical shares, which is still down 18.5% year-to-date.

MA Financial (ASX: MAF) is up 6.8% to a fresh all-time high on an earnings upgrade. The diversified financials company expects FY22 earnings to be up 10-20% on FY21, approximately 2-3% above its previous guidance.

Afterpay (ASX: APT) is weighing the technology sector, down -2.6%. This follows a -2.7% decline from Block.

Fortescue Metals (ASX: FMG) is weighing the materials sector, down -1.4%.

According to FastMarkets, overall iron ore sentiment was weighed down as most steel mills have finished restocking iron ore ahead of the upcoming Lunar New Year.

China will have a week-long holiday commencing 31 January to celebrate the Year of the Tiger. This period should spell muted volumes and price action for iron ore.