Overnight markets sold off after reports the US and Europe were looking to impose a ban on imported Russian oil.

The ASX is in a vulnerable position where the index needs to bounce over the next few sessions to avoid falling below late February lows.

Things begin to look ugly if the index fails to rally and marks a 'lower low'. 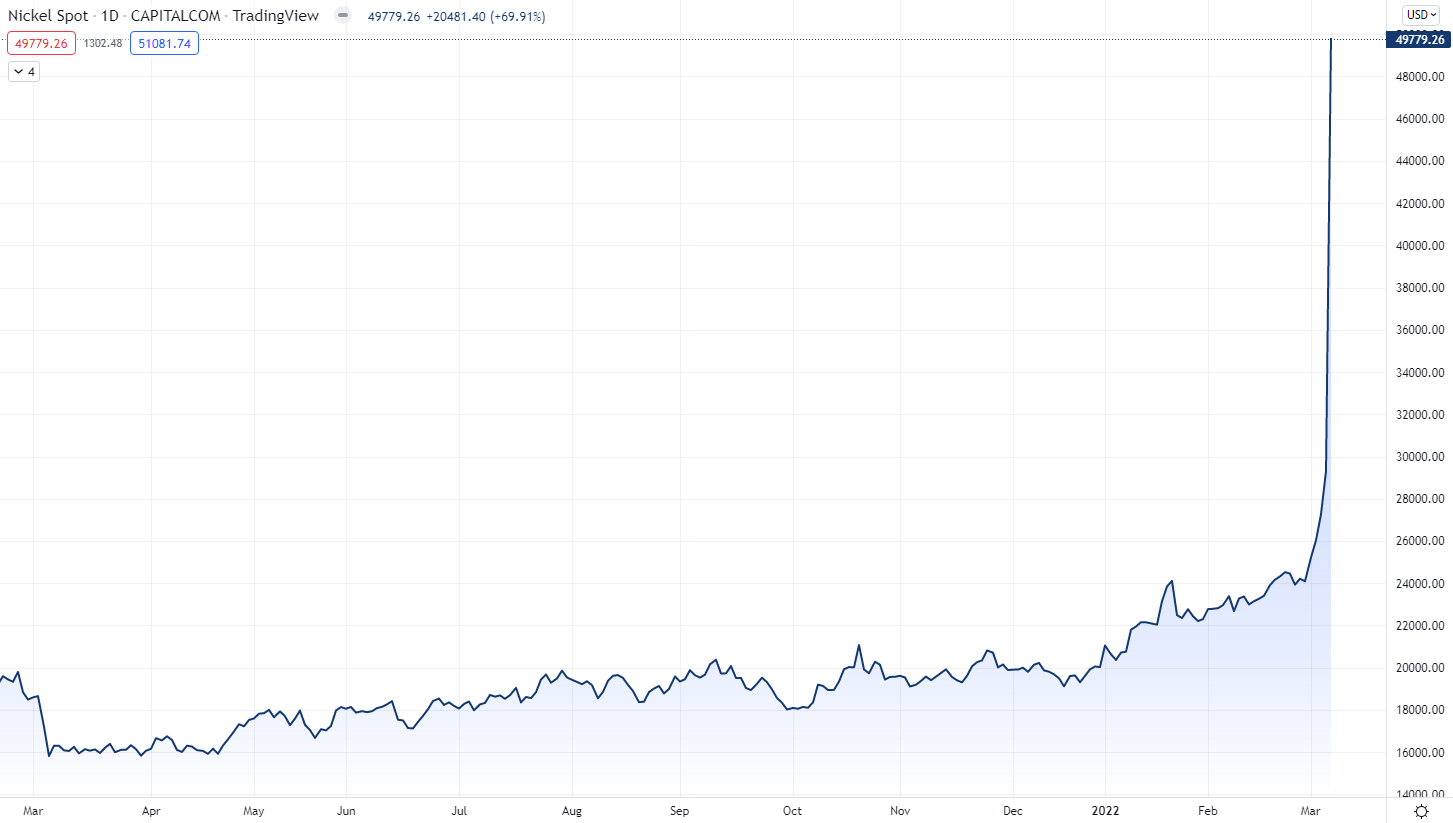 Approximately 70% of nickel is used for stainless steel production, with a growing role in electric vehicle batteries.

Global nickel inventories were already low, and a supply shock from Russia has sparked a sudden scramble for supply.

Most local nickel stocks have struggled for upside despite the jump in spot prices. That said, if a 70% spike in spot prices doesn't move them, what will?

Energy and utilities were the only two sectors to finish in positive territory on Wall Street.

“The market has shown its vulnerable side now though and it’s quite concerning. On the one hand, without German support, an EU ban on Russian oil imports looks highly unlikely and the pivot away will take years,” said Oanda senior market analyst, Ed Moya.

“The risks remain firmly tilted to the upside as far as oil prices are concerned … Even a nuclear deal would only provide partial relief compared to Russian supply disruptions and that isn’t even progressing as hoped.”

“I told you so,” said a gold bull that’s waited 15-months for prices to break out.

The market is finally waking up to gold as the Russia-Ukraine situation remains highly uncertain and markets extremely volatile.

“All-time highs are not that far away and in the current environment, there’s every chance that we see it surpassed at some point,” said Moya.

Up until last month, most large cap gold stocks were trading around 2 year lows. Gold's recent comeback has seen names like Newcrest Mining (ASX: NCM) and Northern Star (ASX: NST) rally back up to 3-6 month highs.

In Monday's morning wrap, we flagged that the US Global Jets ETF hit a fresh 15-month low and looked increasingly bearish amid surging oil prices and the Russia-Ukraine war.

For the uninitiated, the ETF comprises US airlines and a small percentage exposure to international airlines, including Qantas (ASX: QAN).

Qantas shares tanked -8% on Monday, while most travel management stocks fell at least -2.8%.

The Jets ETF plunged -11% overnight. It's now trading at a level before a vaccine was even developed. 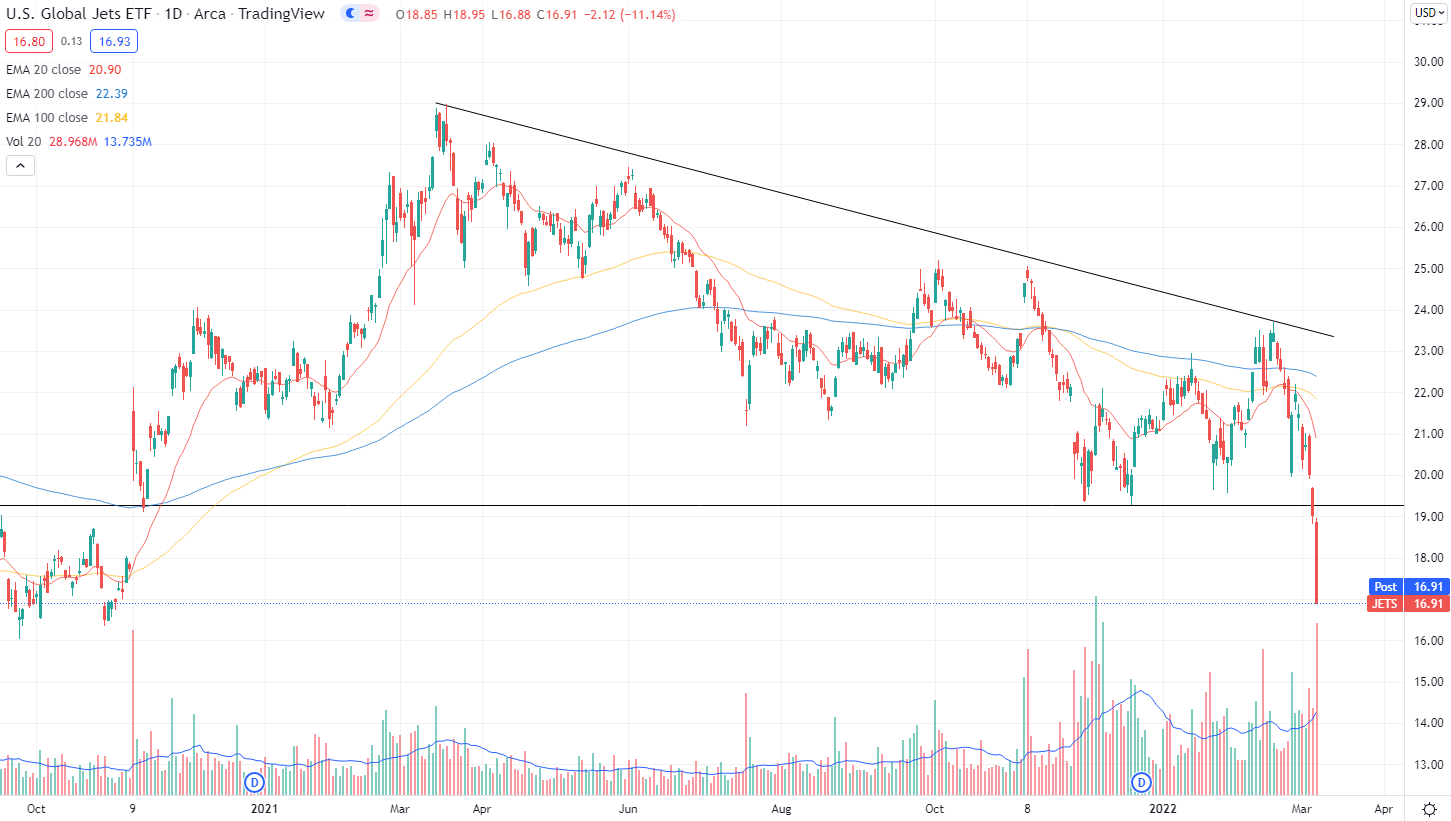 The travel industry has been plagued with bad luck, now having to deal with a crisis that will shun consumers from travelling to many parts of Europe. Persistent inflation will also curb consumer purchasing power, while surging oil prices could mean more expensive flights.

In addition, the Global X FinTech, eCommerce and Cloud ETFs all declined at least -3.5%.

This will flag another decline for local Block (ASX: SQ2) shares, which will likely weigh on the broader BNPL sector.

The tech-led selloff could also flag negative flow for local names like:

Other things of interest: