Energy Spotlight: Brent flirts with $120bbl but back to $109, Biden enviro law scrapped

Brent prices hit $119bbl midweek on the back of geopolitical events, but has since fallen back below $110bbl.

Re-openings of major Chinese cities appear to have done little to change the tide of sentiment against ongoing inflation and recession concerns, even as OPEC+ says it will not increase planned output boosts.

Weekly performance has declined for the third in a row, sitting at -0.12%. 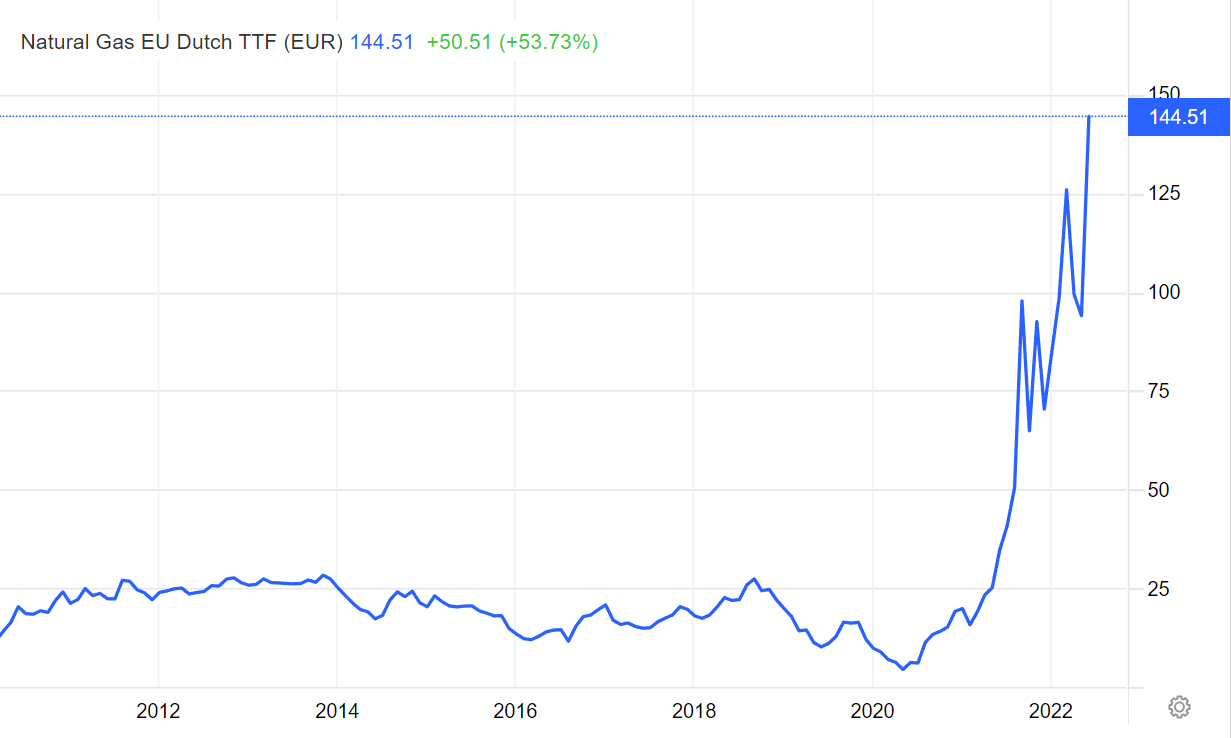 Zooming out for a twelve year chart, the severity of the current Dutch TTF gas benchmark price is revealed (TradingEconomics)

It’s been a week of mixed performance for the XEJ as oil prices have a rollercoaster run on a mix of good news and bad news.

Protests in Libya and Ecuador have both led to the suspension of oil production-export activities, which helped push Brent up to $119bbl midweek.

Turns out that rally was running on fumes—Brent is back down below $110 at the start of July.

OPEC+ won’t produce more oil than it already agreed to and oil markets are still tight, though, Russian production did increase 5% in June.

But Russian Gazprom investors might be a bit miffed— the supermajor isn’t paying any dividends for 2021.

Looking at the macro world of regulation and compliance, perhaps the biggest development this week comes from the US Supreme Court.

A six justice conservative majority have overturned the Federal Biden government’s ability to use the EPA to order states to curb emissions.

Biden’s environmental agenda has been the subject of intense and relentless industry lobbying since he was first voted into office.

Energy companies in West Virginia, Texas, and Oklahoma are the most obvious winners of the challenge to the Federal EPA’s authority.

The legality of an Securities and Exchange Commission rule for companies to report emissions also now hangs in a grey area.

On Saturday, Baker Hughes will release its US rig count data, which will give traders an idea of production activity at the start of July.

On Tuesday, the Australian RBA will make its next interest rate decision.

On Thursday, the American Petroleum Institute releases its US crude oil stock change data for early July — and the EIA releases a raft of domestic US data.

Woodside Petroleum (ASX:WDS) is down -3.83% heading into the last hour of trade.

One week performance for Beach is actually up 5.23%, but one month performance down -0.87%.