Air NZ rights issue could be executed at 35% discount

In anticipation of NZ’s borders reopening to Australia on April 13, and to the rest of the world in May, the country’s beleaguered national carrier, Air NZ (ASX: AIZ) is planning to strengthen its balance sheet via a $1 bn-plus equity recapitalisation.

While the airline stands to benefit from a long-awaited covid recovery narrative, management is expected to give a pending rights issue an added nudge by offering a hefty discount to the last close.

Market whispers suggest the company’s share are to be sold at a 35% discount.

This is the airline’s third crack at a raising funds after two failed attempts last year due to bad timing.

Not unlike big-covid recapitalisation deals on this side of the Tasman, including Sydney Airport, Qantas Airways (ASX: QAN), Webjet (ASX: WEB) and Flight Centre (ASX: FLT) the rights issue is expected to at a near one-for-one ratio.

The deal is expected to be sub-underwritten by Australian and offshore funds on Wednesday night.

At the half year Air NZ reported a statutory loss before tax of $376m, with dividends remaining on hold.

Today’s announced fund raising follows the lifeline thrown to the airline in March 2021, after the Kiwi government extended its loan facility by $600m to $1.5 bn, which also included loan terms being extended to September 2023.

Adding to the rapid fall in the airline’s share price [of around $3] since January 2020 is the overhang endured by shareholders with the NZ government remaining a major shareholder in the national carrier.

The airline’s shares fell 0.78% to $1.28 before enter a trading halt today and are expected to resume trading tomorrow pending an announcement.

Better days ahead but don’t your breath

Despite NZ’s border reopening, Macquarie warns investors not to expect a quick capacity rebound for the Kiwi carrier.

While Macquarie suspects there could be a healthy time lag before bookings rebound, the broker does expect a profitable period for the airline among limited competition.

Meantime, the broker retains a Underperform rating with the target price increasing to NZ$1.15 from NZ$1.10. 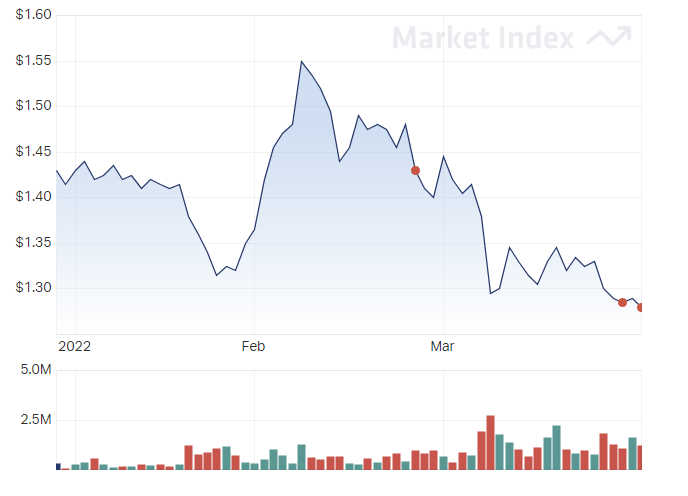