After being heavily sold-off in June, South32 (ASX: S32) opened 1.98% higher this morning after the diversified mining and metals company advised the market it had all but reached its revised annual output guidance target, despite the impact of covid on staffing and global supply chain issues.

Overall, South32 expects to report underlying depreciation and amortisation of US$790m for the 12-month period including US$110m at its manganese business.

Despite production falls across the bulk of the operations, record annual production at its Worsley Alumina operations in WA and all-time high quarterly production at its South Africa manganese business saw the company deliver a result 1% shy of its revised guidance on a copper equivalent basis.

Commenting on today’s announcement, CEO Graham Kerr notes the company had achieved further significant milestones as its reshaped its portfolio towards the metals critical for a low carbon future.

Kerr also noted that stable operating performance had allowed the company to capitalise on record conditions for a number of its commodities, with strong sales in the June 2022 quarter capturing the benefit of high prices.

“Our strong financial position and capital management framework, which is designed to reward our shareholders as our financial performance improves, supported further returns across the year via our on-market share buy-back, bringing total returns under our capital management program to $US1.9 billion since its inception,” he noted. 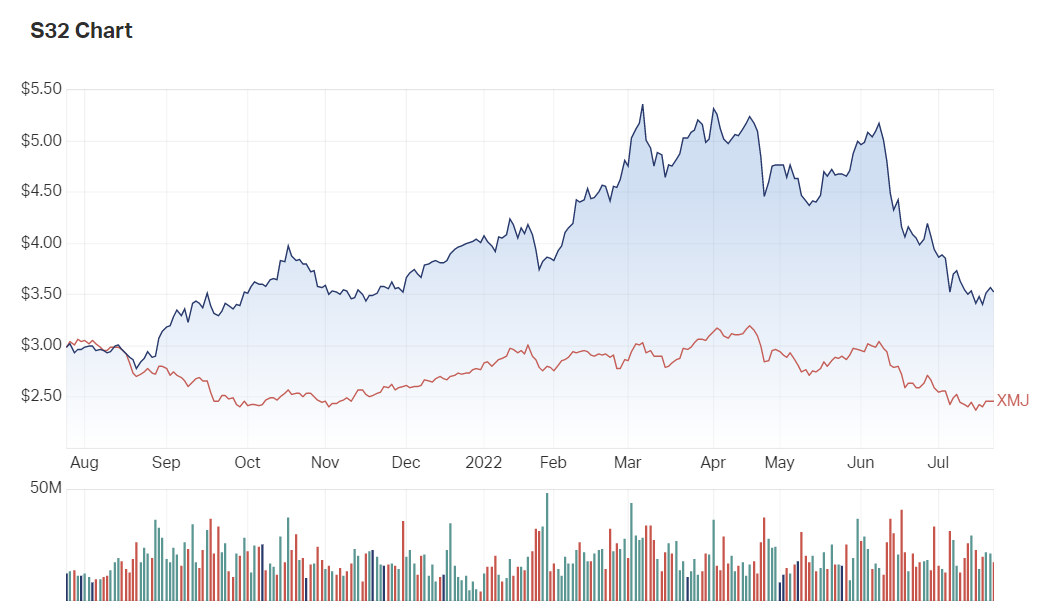 Consensus on South32 is Moderate Buy.

Based on Morningstar’s fair value of $4.91 the stock appears to be undervalued.

Based on the seven brokers that cover South32 (as reported on by FN Arena) the stock is trading with 58.6% upside to the target price of $5.60.

South32 is Ord Minnett’s most preferred mining stock for the remainder of 2022, and the broker expects the stock to regain investor interest on the back of renewed confidence about the economic trajectory ahead. (20/07/22)

The broker retains a Buy rating and target price of $4.80.

Morgan Stanley expects additional cashflow from the sale of a package of four non-core base metals royalties to Anglo Pacific Group to lend support to the company's capital returns program.