The ASX is down -1.05% today following a bearish reversal on Wall Street.

Major US indices opened between 1.3% and 2.1% higher but sold off sharply towards the close, all down around -1%.

The market is looking increasingly bearish, especially after the US market struggled to hold onto last night's rally from an oversold price point.

Every ASX sector has opened in red today, headlined by losses in materials and technology stocks. 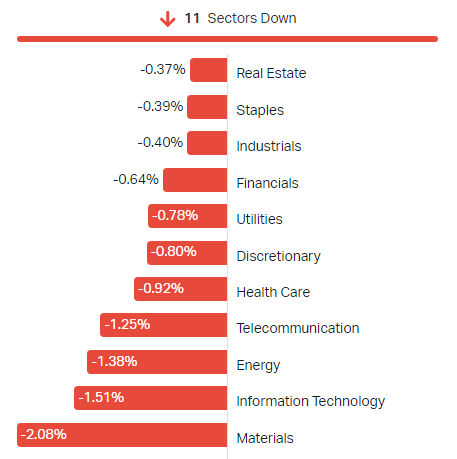 Stocks in positive territory are few and far between. Slight winners include:

1 - Whitehaven Coal (ASX: WHC) shares opened -5% lower after flagging a lower FY22 production guidance and higher costs. Whitehaven expects ROM (run of mine) coal production to be down around 5% compared to its previous guidance.

Note: to adjust from wet to dry tonnes, an -8% reduction is applied to the wet tonnes to adjust for moisture content.

3 - Nuix (ASX: NXL) is down -15% to a fresh all-time low following a first half FY22 trading update. Nuix said its seen a continuation of revenue growth from existing customers while revenue from new customers is lower than the prior period. The business is experiencing materially higher costs, notably in the last two months of the half.