The company touted that the Tanami Heavy REE project, located in WA, “has potential to be a company-making, globally significant discovery.”

During March, the company plans to release the following results, which could provide further catalysts for the stock:

Austin Metals (ASX: AYT) has opened 12.5% higher after starting to drill at the Austin gold project. The company plans to finish the aircore drill program by the end of March.

The company has noted geological similarities to the White Heat and starlight deposits owned by Musgrave Minerals (ASX: MGV), which are adjoined to the Austin gold project.

“Multiple new structures and targets have been identified from the new gravity data we have compiled and are a very exciting new development for the project. Aircore drilling these targets to identify surface anomalism will be the quickest, cheapest and most efficient way of locating which targets are gold-bearing for follow up RC Drilling.” 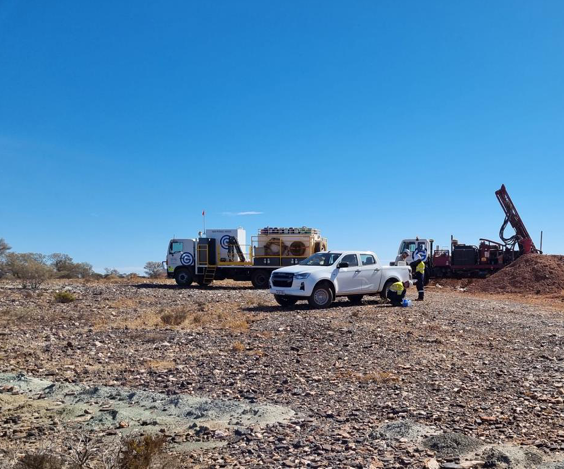 "The Opuwo Project has the potential to be a world-class source of future cobalt supply. The conclusion of the drill program to generate ore samples for the commencement of the metallurgical testing and development work programs is an important step in establishing the feasibility of the Opuwo project."

“This diamond drill program at the outcropping La Mascotte gold prospect will provide detail needed for the KalGold Team to accurately characterise gold mineralisation, both in the oxide zone and in fresh rock. KalGold expects analysis of the drill core to assist in clearly defining controls on gold mineralisation, provide geotechnical data and define new targets.”

The company has also indicated plans to commence the next phase of reverse circulation drilling in late April or early May.

Drilling the first diamond hole at La Mascotte on 17 March 2022 (left) and examining core from the oxide zone (above). Source: Kalgoorlie Gold Mining.

Along with the news, the company noted that eligible shareholders can acquire new shares at $0.03 per share through a one for one rights issue. The company plans to use this to raise $10.7 million before costs to fund project development. The offer opened on 17 March and is scheduled to close on 4 April.