Revelations that the Federal Government is considering one-off payments in the range of $200 to $400 within today’s budget - to address cost-of-living issues for lower income Australians – should be music to the ears of retailers that are typically early beneficiaries of this largesse.

But according to Goldman Sachs, not even another ‘fist -full-of-dollars will alter gradual normalisation of covid impacts from second half 2022 that some retailers have basked in over the last 24 months.

Over the last two years, the strongest growth was witnessed by home improvement and electronics/appliances sectors due to work-from-home measures. Liquor was also strong with off-premises sales absorbed at retail, while department store sales were impacted due to lock-downs of in-store operations.

The broker expects the emergence of several macro headwinds, coupled with greater competition for the online dollar - as the entry barriers are now lowered - to result in an increasingly complex operating environment which is likely to widen the disparity of performances between retailers.

Having reviewed the consumer behaviour shift and company-specific drivers, Goldman’s has initiated coverage of the A&NZ Retail and Consumer sector with a preference now for Food & Beverage (F&B) retailers over Home retailers - including Home Electronics and Appliance companies and General Merchandise players.

Here are the broker’s latest updates:

While Woolworths and Coles have demonstrated a strong ability to manage through historical inflation, Goldman’s expect unprecedented inflation to drive positive price growth for the first time in a decade. 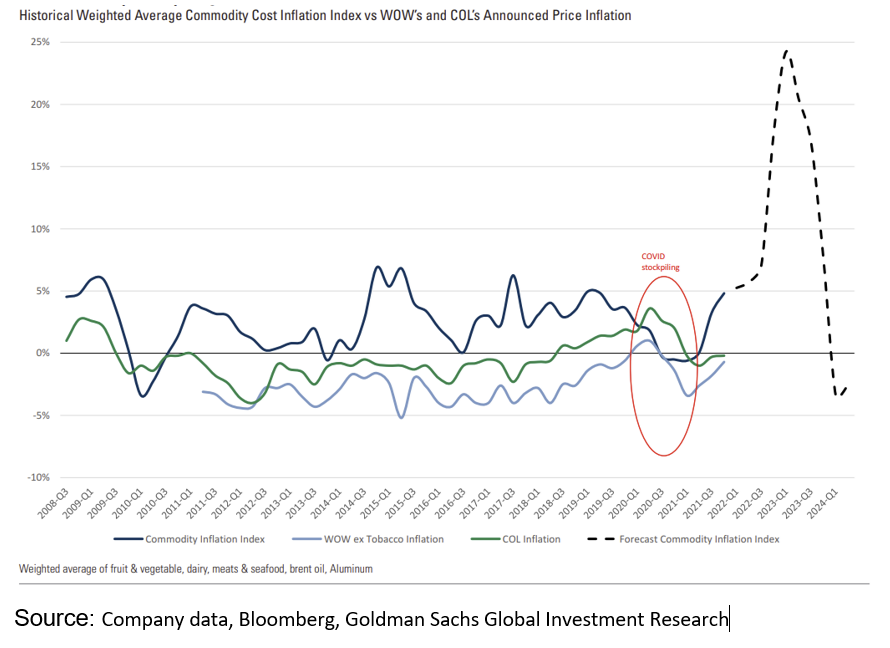 In summary, Goldman’s is positive on Endeavour and Woolworths for their defensiveness against inflation and their omni-channel strategy supported by scaled consumer assets and loyalty.

“Our top picks are Endeavour as the company is unrivalled in its consumer assets and loyalty for a specialty retailer, it is also relatively more shielded from global supply chain disruption,” the broker notes.

“We also like Woolworths for its scaled consumer assets as well as its vision for an eco-system build, which we view as having the best likelihood of succeeding amongst the AU retailers.”

By comparison, the broker is negative on JB Hi-Fi and Wesfarmers due to the slowing housing cycle, and supply chain disruption.

Given JB Hi-Fi’s under-investment against rising competition, and Wesfarmers lack of a growth runway as core business slows, Goldmans expect the stocks to devalue, and the broker’s FY23/24 EPS forecasts are -4.0% and -10.0% for JB H-Fi; and -3.5% and -7.8% for Wesfarmers versus consensus.

“We are more cautious on Home Electronics and Appliances as the retailers are largely price-takers, most susceptible to incoming competition and have not transformed fast enough to build a defensible moat given under-investment." 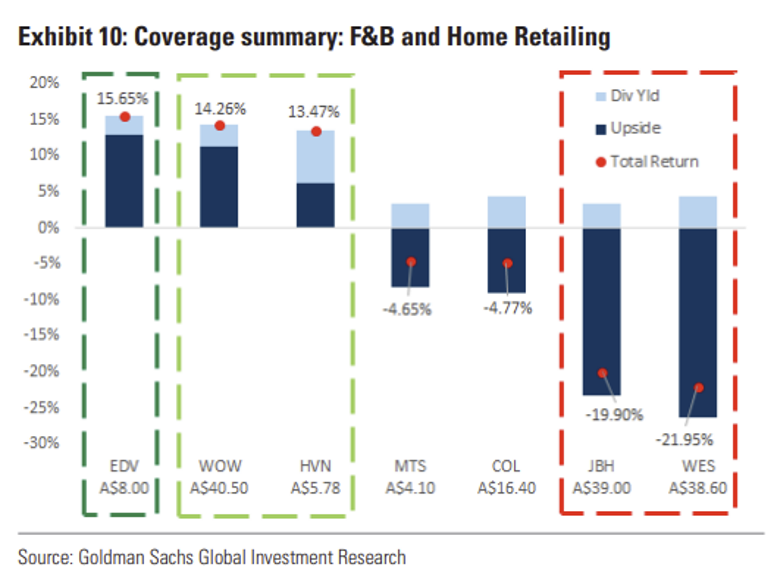