UBS has initiated its coverage of Gold Road Resources Ltd (ASX: GOR) with a Buy rating and a target price of $1.94, citing the long life of the miner’s biggest asset - the 50%-owned Gruyere gold mine - and low levels of capital expenditure going forward as among the reasons.

The broker upgrade came after the Perth-based miner revealed a 70% increase to its gold mineral resource estimate for its 100%-owned Yamarna Project, and gold production during FY21 at its Gruyere mine of 246.5k ounces, which was slightly below the 250k-260k guided.

The mine’s low costs, its 10-year projected life span and its relatively low levels of ongoing capital expenditures were the main reasons for UBS’ upgrade, the broker said.

It also cited Gold Road’s forecast of a 9.4% compound annual growth rate in gold production over the next five years.

Gold Road on January 31 announced a 70% increase in mineral resources at its Yamarna project, of 6.4m tonnes at 2.44g per tonne, totalling 0.51m ounces in gold mineral resource.

The company announced an exploration budget for FY22 of $30m, with the highest-priority targets in its Southern Project Area, south of Gruyere, in Western Australia.

Exploration in the FY22 will include reserve circulation and diamond drilling targets.

Gold was trading today at about US$1990 per ounce, up 10% since the start of the year amid elevated economic uncertainty and war in Ukraine. 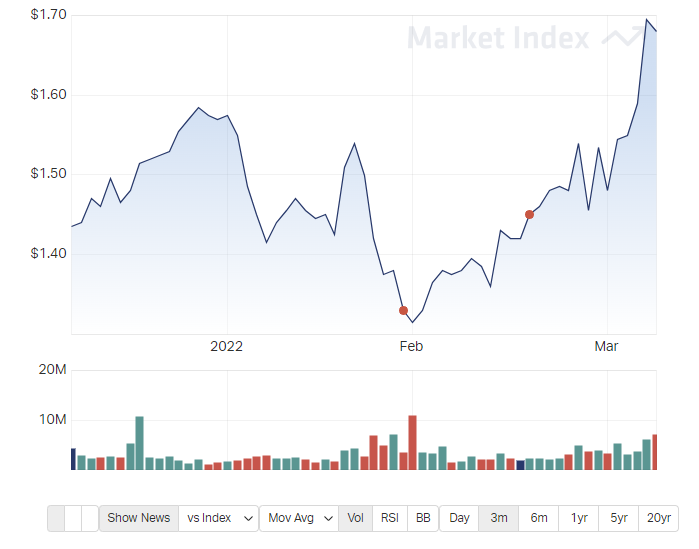 The broker was mainly concerned about lower-than-expected FY22 guidance of 300k-340k ounces. Buy rating retained with reduced target price of $1.60.

Macquarie: December quarter production result was -8% lower than Macquarie’s forecast, but the FY22 production guidance was in line with the broker’s estimates.

The broker retained its Outperform rating, with a 10-cent rise in the target price, to $1.70.