Within a note delivered at this morning’s AGM, Coronado Global Resources’ (ASX: CRN) chairman William Koeck advised shareholders that while the Queensland-based coal miner is experiencing increasing demand for met coal in Europe, the company lacks the capacity to respond to it.

The problem is that current production is already contracted, and this includes to top export market India.

As a result, there’s little opportunity to service additional markets, explained Koeck until the company expands production at Curragh.

Due to a number of geopolitical factors, none the least being Russia's invasion of Ukraine, the group experienced record high met coal prices, with index pricing reaching a new record of US$670 per tonne in March 2022.

Coronado’s group met coal realised price for the first quarter of 2022 was US$267 per tonne, up 183% on the previous corresponding quarter.

Koeck attributes the company’s ability to take advantage of the rapid increase in met coal prices to the decisions taken mid-2021 to restructure debt arrangements through a $550m refinancing package and the sale of various non-core assets.

“These decisive actions enhanced liquidity and provided a more flexible structure that enables us to respond to volatility in the market,” Koeck noted.

On the back of higher coal prices the company issued a $200m unfranked special dividend, which is payable in June.

Once this special dividend is paid, Coronado will have distributed in excess of US$1bn since listing on the ASX in October 2018.

There is no change to the company’s policy to distribute 60% to 100% of Free Cash Flow per year.

Over the longer-term, Koeck also advised shareholders the company is well positioned to continue benefitting from strong demand, and notes India's seaborne met coal demand which is forecast to increase 141% by 2050.

Much of this extra demand is expected to be met through’s Coronado plans to boost production at its Curragh mine in Qld to 13.5m tonnes by 2025.

While met coal prices are expected to pull back over the course of 2022, management expects them to remain above historical averages, with ongoing trade restraints from Russia and China, plus elevated thermal coal pricing providing a floor for met coal prices.

Management also reassured the market that despite recent extensive rainfall in Qld, Coronado will still be able to capitalise on sustained high prices over the remainder of 2022.

"Our mine plans are weighted to higher production in the second half of the year and we are targeting full year saleable production of 18m to 19m tonnes this year,” Koeck said.

"To achieve this, we will double our investment in the business, increasing capital expenditure from $91.1m to between $170m to $190m." 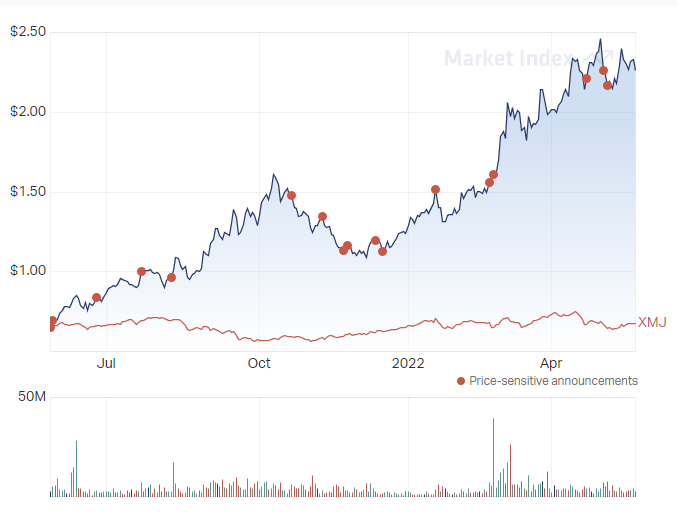 Coronado's share price has been tracking higher over the past year.

While’s Coronado share price has climbed 245% in the past year, and is up 81% in the year to date, it was down -2.36% following management’s AGM update this morning.

Consensus on Coronado is Strong Buy.

Based on Morningstar’s fair value of $2.76, the stock appears to be undervalued.

Based on the three brokers that cover Coronado, (as reported on by FN Arena), the stock is currently trading with 39.9% upside to the target price of $3.19.

Credit Suisse forecasts a 26-36% annual yield through to 2024 with further upside potential, and retains an Outperform rating, with the target price decreasing to $3.40 from $3.50.