The fourth shipment contained 10,489t of nickel-copper-cobalt concentrate, with a provisional invoice submitted for US$18.1m (A$25.1m). Payment is expected in the next week.

“As an unhedged producer we participate fully in commodity price moves and the pricing received on the fourth shipment is one of the best we’ve had since production resumed,” said CEO, Victor Rajasooriar.

Panoramic said that following the fourth shipment, port concentrate stocks have been fully depleted, with 726t of stocks remaining at the mine site.

A fifth shipment has been planned for early July.

Panoramic shares trended strongly for almost 18 months, rallying from around 10 cents in September 2020 to highs of 38 cents in April this year. Only recently has momentum come to a halt due to factors including broader-market volatility, economic growth concerns and stabilising nickel prices.

From a production standpoint, the Savannah Project has been processing metals at 70% capacity (55,000 tpa) as operations ramp up.

The company has an offtake agreement secured until February 2028.

Beyond production, Panoramic intends to explore the "significant inferred resource" that sits adjacent to current ore reserves. Priority areas that will be explored to extend mine life includes:

Nickel has arguably been one of the most volatile battery metals, albeit for the wrong reasons.

The metal was up around 25% year-to-date in early March to US$25,000/t. But a short squeeze drove prices as high as US$100,000 before the London Metal Exchange temporarily halted nickel trading.

Prices have since stabilised around US$30,000. 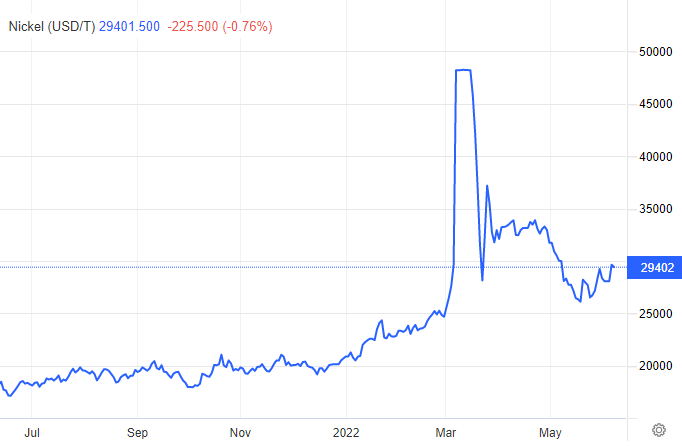 “But given that its fundamentals have started to look softer than we previously envisaged, we would not be surprised if nickel starts to trade lower," said Fastmarkets principal metals and mining analyst, Andrew Cole.

Its worth noting that Panoramic management described the company as an "unhedged producer", which could see some volatility in future earnings, especially if nickel prices start to trade lower.