Global nuclear power capacity needs to double by 2050 to reach net-zero emission targets, according to the International Energy Agency (IEA).

The IEA’s report viewed that “building sustainable and clean energy systems will be harder, riskier and more expensive without nuclear.”

However, its inclusion into mainstream energy will be dependent on “governments putting in place robust policies to ensure safe and sustainable operation of nuclear plants for years to come,” said Birol.

Substantial capital costs for lifetime extensions and new plants has been a key hurdle for nuclear power. "Government financing will remain necessary to mobilise new investment ... because there is rarely sufficient private sector finance for such capital-intensive and long-lived assets," Birol said.

It was warned that without further efforts, the global nuclear fleet operating in advanced economies could shrink by one-third by 2030.

The IEA notes a total of 19 countries with nuclear reactors under construction, demonstrating some degree of momentum behind the sector thanks to spikes in energy prices.

In the past week, South Korea reversed its planned phase out of 25 reactors and Japan's Prime Minister Jumio Kishida expressed his eagerness to restart mothballed plants.

In early July, the US government launched a strategic uranium reserve program, open to bids from US producers for an aggregate of 1m lbs.

Uranium spot prices has largely been rangebound around the low US$50s since September, with a brief rally to decade highs of US$65 in April. 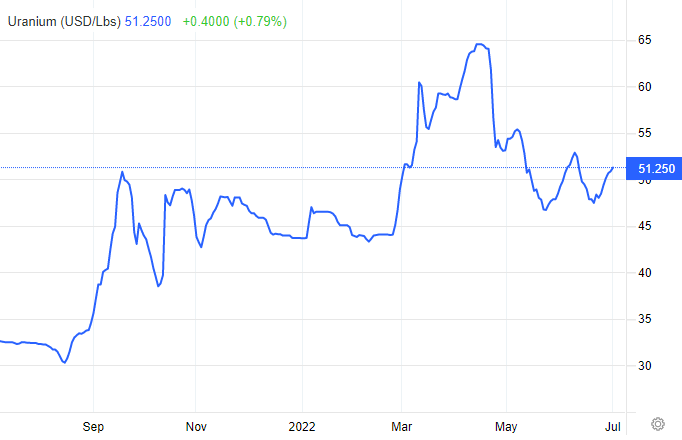 Uranium stocks come back to life: US climate bill, supply squeeze and stocks to watch