Every 5.5 BHP shares gets you one Woodside, but don’t forget the absolute gift horse: Fully franked credits

Assuming shareholders agree to the all-stock merger between BHP and Woodside 19 May, Woodside shareholders will end up with a slice of BHP Petroleum’s oil and gas portfolio.

Under the mechanics of the deal, BHP will (on 1 June) make an in-specie distribution of 1 Woodside share for every 5.5 shares held in BHP. These shares are the proceeds of BHP spinning off its petroleum assets, hence owning 48% of the merged group.

If you’re an SMSF or retiree who has struggled to get a decent return on record low term deposits in recent years, BHP’s 5.5 for 1 in specie distribution also offers an absolute gift of additional income generation.

Based on back-of-the-envelope guestimates, the dividend amount – a la Woodside shares – would according to one fund manager estimate (mid-April) represent around US$4.60 – or 12% of BHP’s share price – which would carry US$1.97 of franking credits per BHP share.

Gaurav Sodhi of Intelligent Investor suspects a possible side-effect of institutional investors waking up with a holding in Woodside shares - they neither want nor asked for - could lead to some blind selling.

This eventuality, adds Sodhi, could lead to some downward pressure of the Woodside share price.

Taking good returns and investing in clean energy alternatives, like hydrogen – with uncertain financial outcomes - to keep institutional investors happy, notes Sodhi is something the market is currently struggling with.

“Given the price of oil (US$103.40) Woodside’s share price should be trading in the $40s, so it clearly looks as if capex and other issues are weighing heavily on the stock,” Sodhi notes.

Woodside will retain its primary listing on the ASX and is seeking a standard listing on the LSE and a sponsored Level III ADR program on the NYSE from completion of the merger.

A share sale facility will be in place for eligible small BHP shareholders – with less than 1000 shares - who elect to participate, and for shareholders who are ineligible to receive Woodside shares. 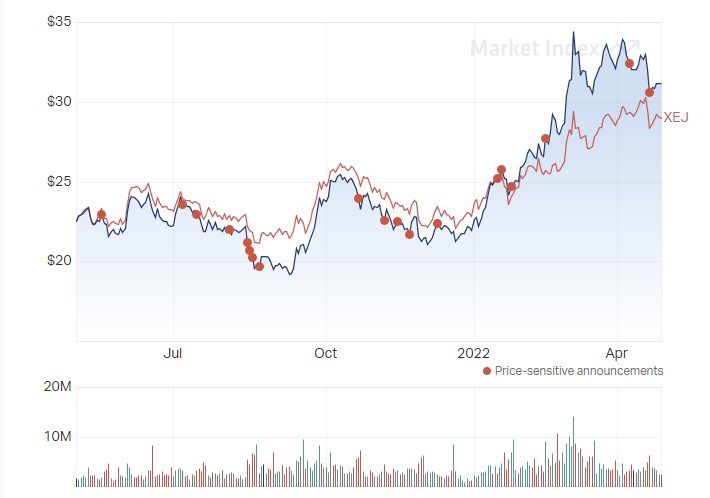