EML Payments is in play: More suitors are expected to circle

For shareholders who have watched the value of their shares in EML Payments (EML: EML) swan-dive from around $5.74 early April 2021 to around $1.02 last Friday, the revelation this morning that the embattled company could now be in play will seem like divine intervention.

Following on from the surprise resignation of long-standing CEO Tom Cregan on 11 July – which saw the share price tank -21.33% - shares in the prepaid card payment company were up 6.86% this morning following confirmation that potential suitors have been circling the business.

Today the company confirmed rumours that last month it had been in discussions with two parties regarding proposals for a potential change of control.

While the company inferred that those discussions have since fallen through, management stopped short of confirming former speculation that the interested parties included Canada’s Nuvei Corp and rival Bain Capital.

With broker valuation on EML ranging from $2.10 to $3.45, it’s easy to see why potential suitors see the company as a potential takeover target.

Even if management accepted an offer at the lower end of that range ($2.10) there would still be a 100% premium on today’s price heading into the close.

However, there’s every likelihood any future offers will start considerably higher than this.

The board has reiterated interest in acting in the best interests of, and maximising value for, EML shareholders and future proposals will be considered in that light.

Meantime, EML will provide an update on its current business performance at the full year results expected to be released in August 2022 and an articulate the company’s future strategy at the company’s AGM in late November 2022. 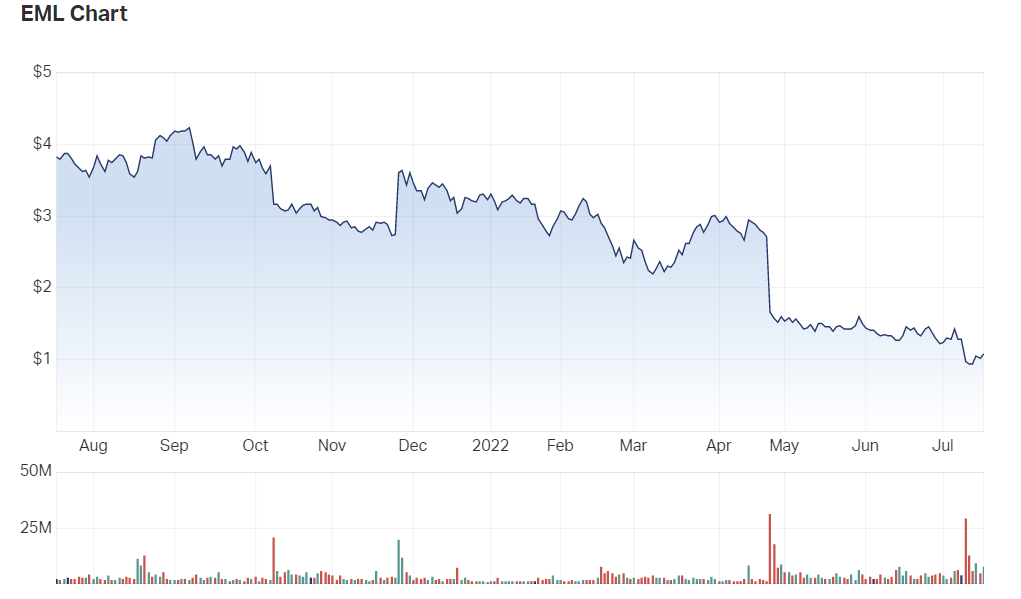 Consensus on EML is Moderate Buy.

Based on Morningstar’s fair value of $3.38 the stock appears to be undervalued.

Based on the three brokers that cover EML (as reported on in FN Arena) the stock is currently trading with 159.9% upside to the target price of $2.83.

While UBS recognises the elevated risk profile, the broker believes the increased risk is now priced in and retains a Buy rating, while the target price has been cut to $2.10 from $2.30.

With rising interest rates more than offsetting risks around execution, Macquarie (27/04/22) retained an Outperform rating, while the target was reduced to $3.45 and $3.95.

Meantime, with EML’s shares having threated to fall below the psychological $1 barrier, short selling in the stock was up 1.77% over the week to 10.44%.