Copper prices rose 51% to US$4.46/lb in 2021 as global industrial activity recovered from the pandemic and inventories fell to historically low levels.

2022 has been far from exciting as prices trade sideways been lows of around US$4.2/lb and highs of US$4.8/lb. The lack of price action has likely pivoted investor attention away from Dr Copper, towards more high profile and upward trending metals like lithium, nickel or even iron ore. 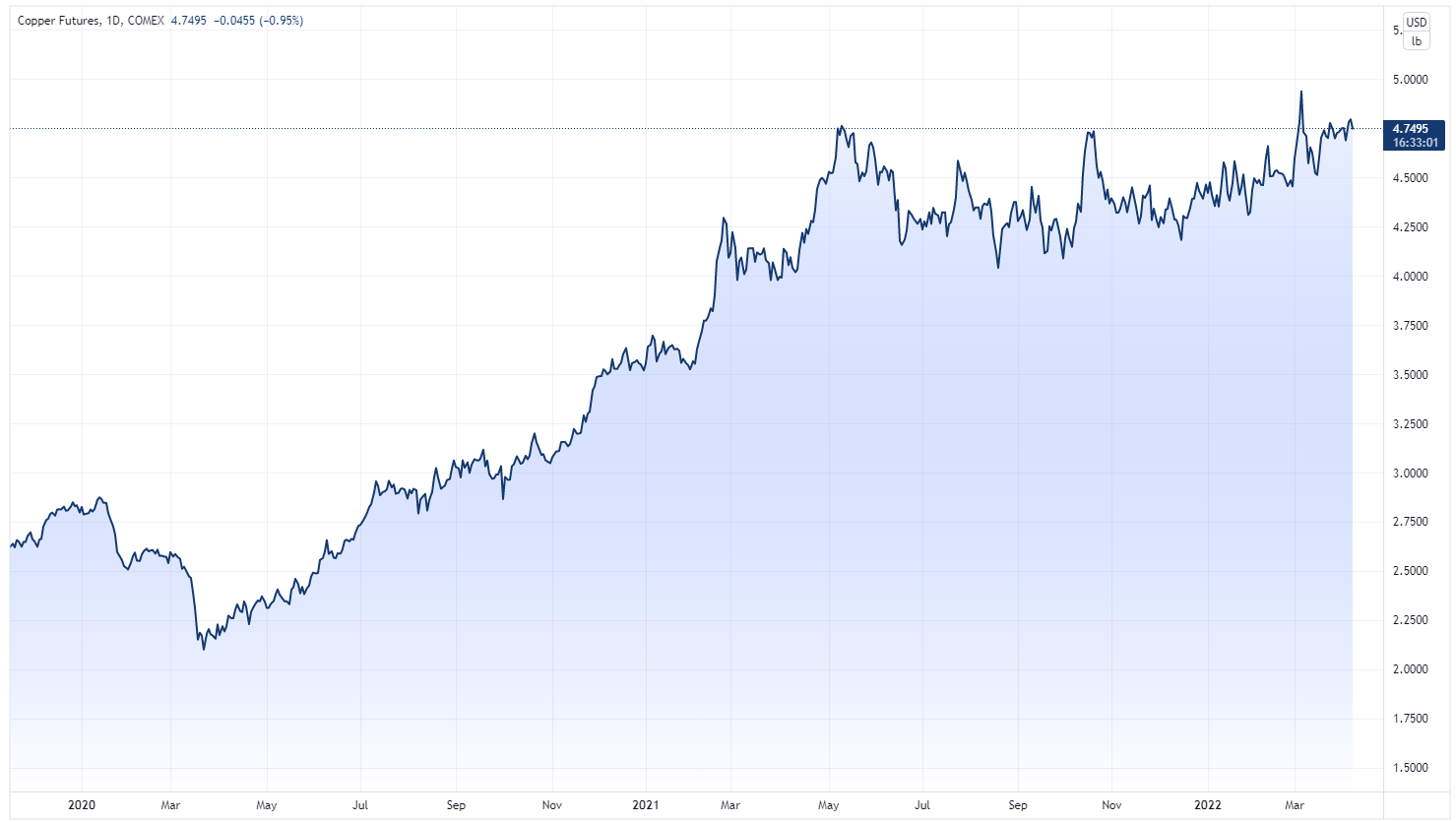 Notwithstanding the lack of recent upside, copper's conductivity, malleability and durability, make it a fundamental material for not only infrastructure and equipment but also for the growing electric vehicle (EVs), battery and renewable energy industry.

China accounted for more than half of global refined copper consumption in 2021, according to the World Bureau of Metal Statistics. Chinese consumption slowed towards the end of 2021, weighed by the nation’s energy crisis and troubled property market, a key consumption industry for copper.

The March quarter 2022 remained soft due to China’s week-long Lunar New Year holiday and halted industrial production for the Beijing Winter Olympics. The recent spike in covid cases in China has proven to be a major downside risk for commodities.

China’s March factory activity fell at the fastest pace in two years, down to 48.1 from 50.4 in the previous month. A reading below 50 indicates contraction.

The Australian Government’s commodity forecaster, the Office of the Chief Economist (OCE) said that copper used in EVs, batteries and chargers could account for as much as 10% of global refined consumption by 2030.

“Demand for EVs — which contain up to five times more copper than conventional cars — has continued to exceed expectations. Infrastructure such as charging stations and improved transmission lines will be needed to support this growing trend,” said the OCE in its March Quarterly report.

Prices are expected to ease slightly as mine production comes online. The OCE forecasts prices to stabilise around US$8,000 a tonne (US$3.63/lb) in 2027.

The state of play for ASX-listed copper companies

Oz Minerals (ASX: OZL) is the largest copper play by market cap. Consensus on the stock is a Hold with a $25.30 target price.

Rising industry capital costs, execution risks and weak cash flows were the main factors holding brokers back from a more positive view of the company.

Brokers appear to be overlooking the near-term cost pressures for advancing Matsa. Macquarie expects the new project to dominate the company's earnings over the next few years. Consensus rates the stock as a Buy with a $7.38 target price.

29 Metals (ASX: 29M) made its ASX debut on last July at an offer price of $2.00 per share, now up 42% since listing. The company operates two producing miners in WA and Queensland as well as a substantial exploration portfolio.

A few brokers began covering the stock in February, with consensus sitting at a Buy with a $3.25 target price. Macquarie noted that the company's March Mineral Resources and Ore Reserves Estimate only provided partial drill results from the Cervantes Project, offering potential upside.